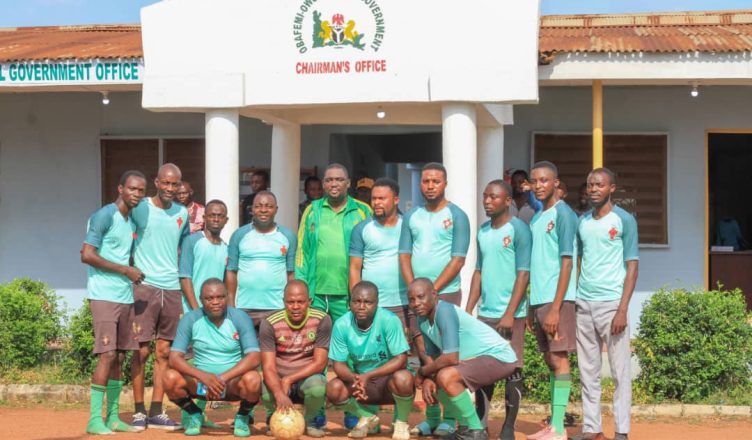 It was an evening of fun and sportsmanship yesterday when political functionaries of Obafemi Owode local government led by the chairman, Ambassador Ogunsola Adesina Lanre had a football match with the career staffs of the council.

The event which took place at AUD Primary School, Obafemi Owode local government,was part of activities to mark the 100 days in office of the LG administration.

Meanwhile, after a tensed 40 minutes,team ‘A’ which comprises of political functionaries emerged the winner of the novelty football match with 4 goals to 1,whereby the Executive Chairman as captain of his team, named man of the match with three goals registered to his name.

Ambassador Ogunsola,during the kick-off earlier thanked the Almighty God for a successful 100 days of his administration in office.He also commended the Career staffs for peaceful working relationship.

The novelty match was to encourage exercise and sporting activities among LG functionaries and career officials in the council.

The organiser of the event, Shola Fawehinmi said the event will promote sports among the adult in the community.

He used the occasion to seek the support of the LG administration to support his “Catch Them Young” football team. Fawehinmi said they are the future glory of the town in local and foreign football.