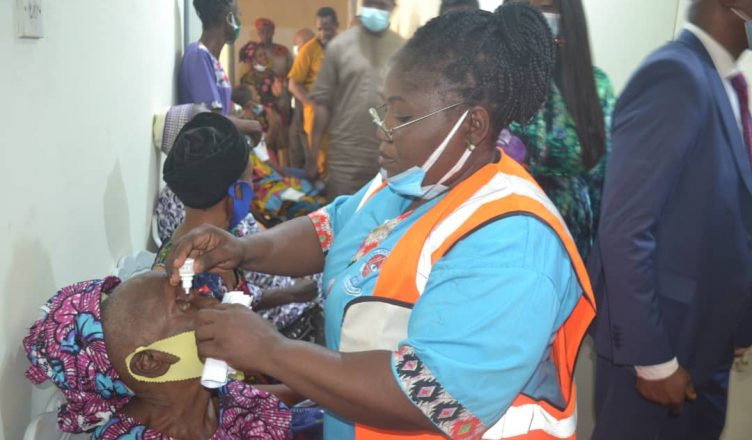 The Ogun State Government, in collaboration with the 8th of March Initiative and the National Eye Center, has organized a free eyecare programme for thousands of residents across three Senatorial Districts of the State.

The Commissioner for Health, Dr. Tomi Coker during the official flag-off at the General Hospital, Ikenne said 1, 500 residents of the State will enjoy free eye surgeries, saying thousands of others will gain access to free consultations, screening and other corrective eye care interventions.

She disclosed that the interventions will be replicated at the General Hospitals, Idiroko and Owode-Egba between Monday, May 31 and Wednesday, June 9, 2021, urging residents across the State, especially the aged to maximize the opportunity of receiving quality eye care services from the best hands.

Coker said the 8th of March initiative, which is the brainchild of the Friends of the Vice President, Professor Yemi Osibajo, is aimed at conducting free eye surgeries for 6, 000 individuals across the six geopolitical zones of the country, saying the initiative was created to commemorate the Vice President’s birthday.

“It gladdens my heart that Ogun State happens to benefit from this great intervention. Access to quality eye care services, especially in rural areas is of great concern and thus, it is imperative that existent resources are effectively used, targeting the major avoidable causes of blindness.

“Here in Ogun State, it was identified in a study as far back as 20 years ago that something as seemingly simple as cataract was responsible for 36.6% of visual impairments. The same study demonstrated that 87.5% of blindness and 75.7% of visual impairment were avoidable. We cannot be grateful enough for this programme,” she said.

Appreciating the Governor of the State, Prince Dapo Abiodun, for creating an enabling environment that continues to attract life-improving collaborative interventions to the State, the Commissioner appealed to residents of the State to avail themselves of soon-to-be launched Ogun State Health Insurance Scheme and the qualitative as well as affordable services at the newly refurbished Primary Health Centers across the State.

In her remarks, the Senior Technical Assistant to the President on Community Engagement, Office of the Vice President, Dr. Ebi Awosika, described Professor Yemi Osinbajo as a lover of social interventions that would improve the lives of ordinary people across the country.

Awosika said the March 8th Initiative was launched in 2020 in honor of Vice President, in a bid to support and further fuel the entrepreneurship industry in the country, commending the Ogun State Government for its desire to ensure successful outcome of the initiative in its domain.