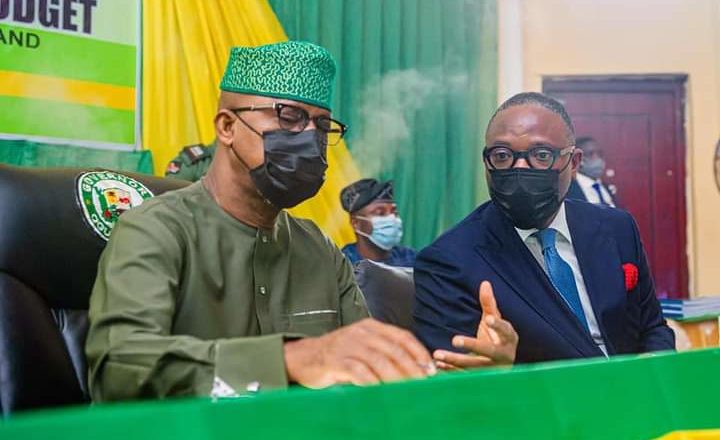 Ogun State government on Monday disclosed that in the year 2021 Budget, the great emphasis would be placed on the relative values and cost of each expenditure item and sub-head.

The government said it would continue to commit resources to complete and fund key infrastructural facilities capable of unlocking the socio-economic potentials of the State.

The State Governor, Prince Dapo Abiodun stated these at the Treasury Board Meeting on 2021-2023 Medium Term Expenditure Framework and 2021 Budget, held at the Oba’s Complex, Abeokuta.

He noted that next year’s budget would further showcase the administration’s commitment to good governance to the people.

Governor Abiodun stressed the need for him and other managers of public funds to be innovative by devising new approaches to fulfill government policies and programmes, as a result of increased public expectations.

He noted that ,”the new normal demands more prudent management of scarce resources.”

He emphasized that economic growth can only be measured in terms of planning and functionality of the economy. “Economic planning explains the control and direction of the economy adopted by the government to exercise its efforts’, he said.

“That is why the desire and approach to accelerating the pace of the socio-economic development in a State depend on key economic decisions made, not only by the government but by all stakeholders affected by such decisions.

“And, on the other hand, achieving the targets and objectives of the economic planning is largely dependent on the functionality of the government’s machinery, and those who manage the economy on behalf of the government. All this informs the deliberate and calculated approach our administration has adopted in the preparation of a functional annual budget for Ogun State since 2019”, the governor explained.

He said the Public Service, in its important role as implementators of government’s policies and programmes, must not only be dynamic and abreast with the government’s expectations of meeting the increasing public needs but be prudent and innovative in its approaches.

The governor noted that the Treasury Board meeting was to get the contributions of the state public servants who are the executors of government programmes and projects as well as to cross-fertilize ideas on how to have a budget that would meet the needs of the people.

Prince Abiodun while urging all hands to be on deck for a more robust 2021 fiscal year that would sustain policies and programmes, added that greater attention was focused on tackling the Covid-19 pandemic and boosting the economy this year, appealing to officials of Ministries, Departments, and Agencies to present programmes and projects that would help in achieving the ‘Building Our Future Together’ Agenda of the present administration.

“For the coming Year 2021, we all have responsibilities to ensure a more robust fiscal Year that will sustain our policy and programmes towards the successful implementation of “Building our ​Future Together” Agenda. I call on all relevant stakeholders to continue to cooperate and collaborate with us towards building a more prosperous future of our dear State”,he said.

The Commissioner for Budget and Planning, Mr. Olaolu Olabimtan, said the State, for the first time, was able to produce the Medium Term Expenditure Framework (MTEF) and the Medium-Term Revenue Strategy, adding that revenue must be pragmatically and efficiently deploy to meet the economic downturn occasioned by the Covid-19 pandemic.

He said ,”though there are many things to spend money on, the resources are limited, hence the need to plan and get government priorities right.”

The Economic Adviser and Commissioner for Finance, Mr. Dapo Okubadeyo, hinted that government remains resolute in abiding with international best practices on-budget implementation, observing that aspirations have financial implications and there was need to raise and use funds judiciously.