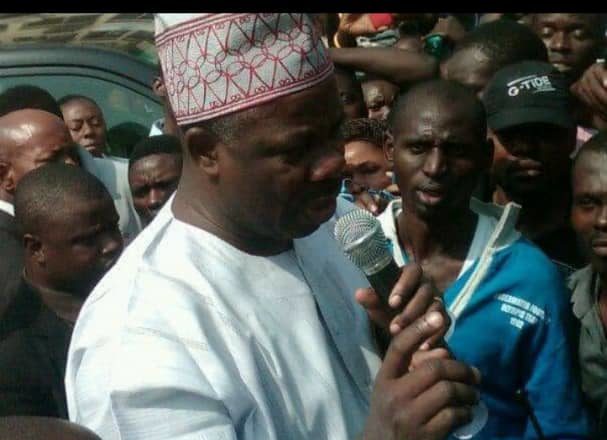 Many who can remember the beautiful look of Ibara Okelewo will behold the narrow road of Onikolobo that passed through Ibara to the popular Sapon market.The Advent of GSM gave many building on these axis more focus.The Tego Complex wasn’t a mall as many believed, mobile phone dealer like Tarmac (a brand name)gave the building more attention in the early 2000.

During the tenure of Otunba Gbenga Daniel,this part of the state capital enjoyed tremendious touch as the road that led to Sapon,and the very busy Oba Lalubu road were re-constructed.For those who are conversant with the previous look, should fast forward to when over-head bridge was constructed by Senator Amosun administration.
One of the dividend of GSM, employment opportunity was seen at this part of the Rock City.
As the use of mobile phone increased, technicians and phone market increased.The construction of the bridge and demolition of Tego Complex created a bigger space for phone business.The investors and “alarobos” had free day to do business as many were using a makeshift shops.
The freedom to do business developed to social and commercial events that gulp millions on yearly basis.The formal governor had a different intention when he left them on the government acquired land as it was part of the Central Business District proposed at the tail end of his administration.
The entrepreneurs that occupied the open land made no plan of relocation until recently when Tego family approached them for a rent fee or vacate the land.This didn’t go down well with the people as they believed compensation was made to the family during the last administration.
However,other families that owned properties on the land were also frequently going to the court to get an injunction to reclame their land.As soon as the court injunction came to their noticed,the Tego family proceeded to Police Headquarters,Eleweran with their documents to inform the police of their intention to get their property.
The question in the mind of every observer of these events ,is that were they not expecting it?

In as much as the government didn’t sell the land to the association of mobile phone dealer,vacating the open space should not be a problem.Even, when the government failed to build a place for their business,it’s not an excuss for false occupation of a private properties.
It’s a shame that such a well establiment can be in a state of dilemma of their business environment and poor leadership.I understand that since the previous chairman, Pascal was kicked out due to financial crisis and lack of transparency,the new leader Lobot had done everything possible to unit the members even in the midst of supremacy among old members.
In addition,this is the best time the government need to come to their rescue because SME is a major player in the economy of the state.The administration of Prince Dapo Abiodun will not look away from this ‘business go wrong’,and revenue slot which was neglected for many years.The three story building(Fatgbems building) which was recently sold should be looked into if it is fit for the business it is used for.
The ministry of Rural and Urban Planning should look into the placement of metal container shops under the uncompleted building and the safety of the people doing business in the place.
I strongly believe that the Abeokuta South Local Government is in a better position to politely provide an alternative for the people,not to falsefully erect a sign post on a land that is not hers.