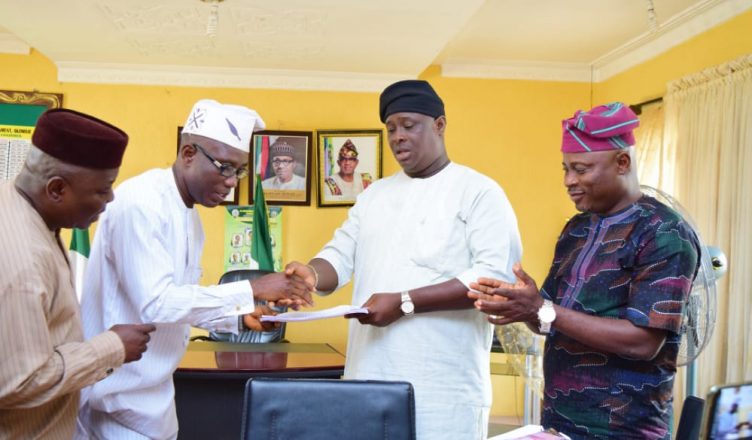 Responding, the new LG boss, was full of appreciation for the immeasurable support he got from Prince ‘Tunde Tella during his electioneering journey to become the Executive Chairman of the Prestigious Local Government. Prince Ayorinde described him as a pacesetter whose unequalled wealth of knowledge will always be tapped from.

The Chairman used the occasion to assure the people of his administration total commitment towards the development of the Local Government Area irrespective of political affliation.
He therefore solicited for the unconditional support of all and sundry to attain future progress and development to the Council Area.

Thereafter, he performed his first official assignment by signing the hand over note received from his predicessor.

The new Council boss accompanied by the Vice Chairman, Hon. Ayoola Oluajo, some of the newly elected Councilors and others paid a visit round the offices to familiarize with the new environment.

In his own words, the HOLGA, Com. Tajudeen Olusesi assured Prince Ayorinde of the unflinching cooperation of the Management and Staff in ensuring a hitch free and resounding success of the administration.