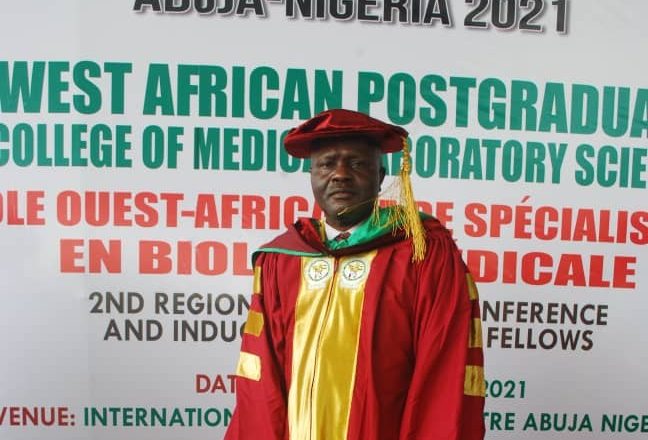 It was a day of honour and celebration yesterday as West African Postgraduate College of Medical Laboratory Science conferred a Fellowship Award on Adekoya Abimbola Julius, the Medical Director of Bimade Diagnostic Services.

The honour was seen as well deserved for his professional contribution to the field of Medical Laboratory Science in Nigeria.

He graduated from the Obafemi Awolowo University with a degree in Microbiology in 1992.

The zeal to become a professional got him to study Medical Laboratory Science from the University College Hospital (UCH) Ibadan (1996).

He attended the prestigious School of Ultrasound, University of Jos Teaching Hospital (JUTH) where he obtained a Postgraduate Diploma (PGD) in Medical Ultrasonography in 2009.

For more knowledge, he went back to the College of Medicine, University of Lagos in 2014 to obtain yet another Master’s degree in Anatomy.

He became a certified Sonographer and was licensed by the Radiographers Registration Board of Nigeria (RRBN) in 2020.

He has a Postgraduate Diploma in Mass Communication from the University of Lagos.

Abimbola has attended many International Conferences such as annual conference of British Medical Ultrasound Society (BMUS),
The International Society of Ultrasound in Obstetrics and Gynecology (ISUOG) and others.

He has some papers in academic journals and has written over 50 published articles in the National Newspapers to his credit. The articles include the following:
— Facts about Staphylococcus (The Post Express: 12th February 1999)
— Politics of Medical Laboratory degree (The Punch : Friday, May 10th 2002).
–Men and Infertility (The Punch: March 23rd , 2004)
–Facts You Must Know About Sickle Cell Disease . (Saturday Punch July 24th 2004).
— God The first sonologist: (The Guardian January 4th 2011& Punch January 15th 2011)
— Between Medical Laboratory Science and Science Laboratory Technology: ( The Guardian April 18th 2011)
— The menace of Lagos Street “Doctors”: (Punch June 25th 2012)u

He is happily married and blessed with children.