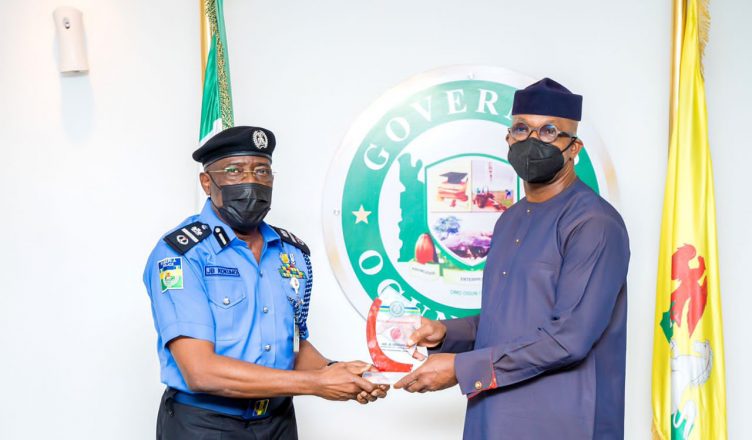 Prince Abiodun who made this known on today when he played host to the new Assistant Inspector General of Police in charge Zone 2, Johnson Kokumo in his office at Oke-Mosan, Abeokuta, equally said Ogun with many federal roads would require huge manpower and equipment to monitor criminal activities on the roads.

The governor lauded the Air Wing of the Police Force for helping in combating criminal activities, especially kidnapping in the state.

He commend the AIG for his initiative to provide security at Kara and under the Long Bridge axis of the Lagos-Ibadan Expressway.

Abiodun explained that the Nigerian Army, through its General Officer Commanding (GOC), had pledged to support the state by deploying tracking equipment to track kidnappers, urging men of the Nigeria Police to work in synergy with the Army to achieve the set objective.

“The biggest issues we have today in Ogun State are that of random kidnapping and cult activities.

“I believe that the cult activities have abated now because of the joint efforts of the Nigeria Police, the State Security Services and the Nigerian Army.

“However, we are still struggling and dealing with issues that relate to kidnapping of contractors, farmers and innocent Ogun State residents. We sincerely hope that as we go along in our relationship, we will collaborate to ensure that we reduce this incident of kidnapping to absolute zero”, the governor said.

While describing insecurity as an act of sabotage, he said Ogun has been proactive in the area of security by rejigging the State Security Trust Fund, which according to him, had helped in providing patrol vans, communication and other gadgets to enable security agencies carry out their functions effectively.

The Governor, however, thanked President Muhammadu Buhari for approving the use of a Nigeria Police helicopter that has been working and providing air surveillance in the state.

“You will note that Ogun has an unusual amount of federal roads compared to other states. We have the Lagos-Ibadan expressway, Epe-Ijebu-Ode, Sagamu-Ikorodu and the Lagos-Ota-Abeokuta road, all these are federal roads. We find out that 80 to 90% of the stretch of these roads are in Ogun State and it is humanly impossible for the men of the Nigeria Police to patrol all those roads as adequately as they require

“But each time we have a distress call on any of those locations, either from Yewa, meaning Imeko, Ipokia all the way to Ogun Waterside or Ijebu-Igbo, the helicopter was able to respond swiftly to the distress calls while your men now move in, thereby ensuring that the kidnappers are not able to leave the immediate corridor before the men arrive. I want to use this opportunity to implore that you help us to discuss with your men of the Air Wing to ensure the speedy return of this helicopter”.

Speaking earlier, AIG Kokumo said Zone 2 comprising Ogun and Lagos States police commands was planning a joint operation between the two commands to fight criminals, particularly at Kara and Under the Bridge along the Lagos-Ibadan Expressway.

This, according to him, is to ensure that adequate security is provided for companies, industries and individuals operating along the axis.

The AIG who hinted that he was in the state on a familiarisation visit, noted that the Zone was working on a synergy between the Marine Olive Units of Lagos and Ogun State command to provide security in the coastal areas.

Kokumo also appreciated the Abiodun-led administration in the state for providing the necessary working tools to the police force, noting “without the commitment of the governor, policing the state would have been difficult”.