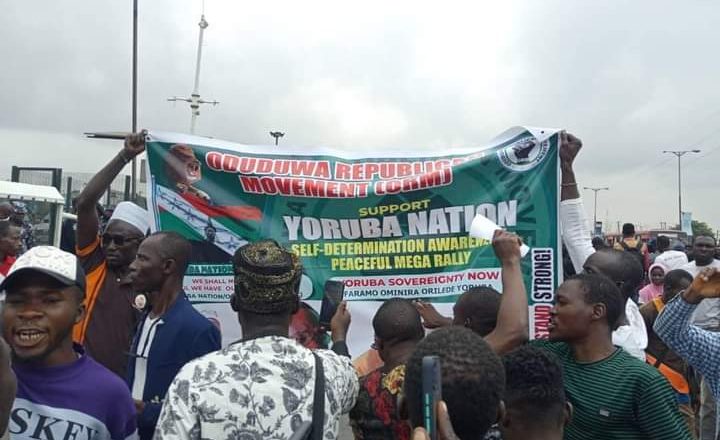 The Yoruba Nation Agitators have defiled government directive not to hold rally in Lagos,as they troped out in their hundreds to have a peaceful rally.

The rally was reported suspended due to the latest invasion and arrest of members at the residence of the Agitators leader, Sunday Igboho in Ibadan by Department of State Security.

Despite the presence of security personnels, the event was necessary to the Agitators as a follow-up to government determination to subdue the seal of the successionist.

It will be recalled that the Lagos State Police Command have directed that the rally should not hold as Security report may not guarantee it’s peacefulness.

Though,the group leader was not seen at the rally at the time of this report,he was allerged to have been arrested few hours ago,but a voice message on social media refuted this.

He has not made any official statement in relation to this.A video released by his media spoke man,showed Igboho owing to the possession of weapons and giving order of purchasing more weapon to defend his course.

The government are yet to made a statement or move on how to address the issue as a nation.