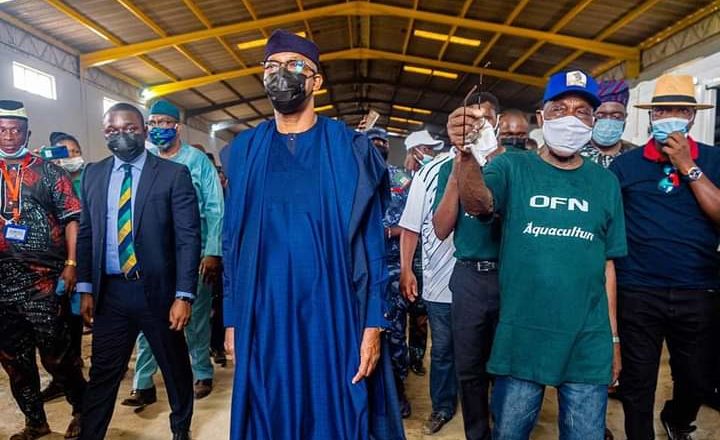 Ogun State Governor, Prince Dapo Abiodun, has disclosed plans by his administration to have an agro-allied based airport to aid the development of the state as a destination of choice for agriculture in Nigeria.

Abiodun, who spoke during the inauguration of Agbeloba Aquaculture Hub in Owiwi, Ewekoro Local Government Area of the state, said the agricultural sector remains the sure way out of poverty and unemployment ravaging the country.

The project is being promoted by a former President, Chief Olusegun Obasanjo.

While also expressing optimism that his administration believes that the state and the country as a whole can actually grow what it eats, the governor commended Obasanjo for continuously and tirelessly walking his talk on agriculture.

He said, “We are looking at having an agro-allied based airport from which agro produces like what we have here can be airfreighted outside the country and still get to other destinations fresh. We are looking at this kind of things that will complement all that we are doing.

“We, as a government, believe in what Baba (Obasanjo) is doing and we will continue to advocate for this because we see ourselves as fast becoming the bread basket of this nation.

“We believe in this project, we believe that agriculture is a way out of poverty and unemployment. We believe that we can actually grow what we eat and what we grow and we want to commend former President Olusegun Obasanjo for continuously and tirelessly walking the talk.”

Abiodun stated that his administration was confident that the bid to make the state a special agro-processing zone would soon become a reality.

He pointed out that in the coming year, at least 5,000 young people in the state will receive mentoring, support and linkage to profitable agro-investment firms, as a prelude to setting them up in their respective businesses.

The governor stressed that the nation’s recent experience, especially during the lockdown necessitated by the outbreak of COVID-19, has brought to the fore the need to ensure food security.

“It is a reminder that we now need another Operation Feed the Nation (OFN) more than ever before. This time, it has to be urgent and with home grown initiatives,” he said.

The governor lauded Obasanjo for engaging in projects that have helped to tackle the rate of unemployment in the state and the country over the years.

He said, “It is important to note that Baba (Obasanjo) did not start his agricultural revolution just yesterday. He is a legend who is fondly remembered for his popular ‘Operation Feed the Nation (OFN)’ Agricultural Programme, long before Obasanjo Farms Nigeria Limited.

“That was 45 years ago when he was Head of State; and aged only 38. At that time, Baba had seen that the future of our great country lies in Agriculture. And, even after leaving office, we are pleased that he did not abandon the OFN he initiated.

“In fact, Chief Obasanjo remains one of the former Heads of State in the world who will proudly tell anybody who cares to know that ‘Agbe ni mi o’. I am a farmer. No doubt, he is not a run-of-the mill farmer, Baba is a very successful farmer. This project is an addition to his vast farm estate.

“We must also commend Baba’s exemplary attitude of placing value on technology, productivity and excellence. These have attracted numerous private sector players into the agriculture sector, which has saved the African continent from hunger and reduced dependence on foreign countries, for our food needs.”

In his remarks, Obasanjo appropriated the governor for his support towards the development of agriculture in the state.

The former president assured that he would continue to contribute his own quota to the development of the agriculture sector in the state and the country as a whole.