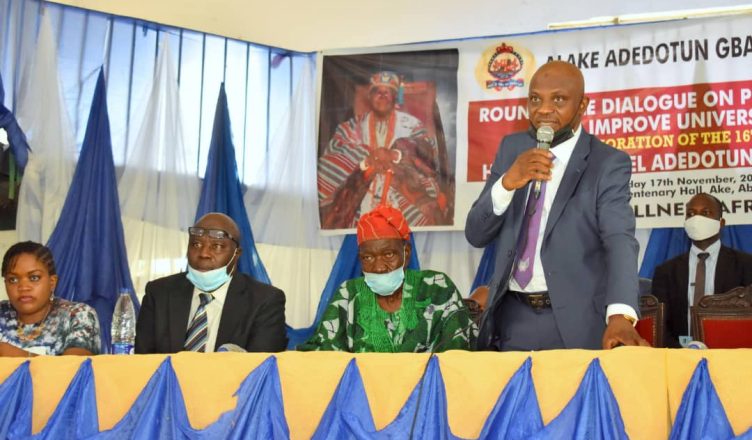 The initiative made the call during the 2nd edition of its annual Roundtable Dialogue on “Promoting Health Insurance to Improve Universal Health Coverage”, facilitated by Wellness Africa Foundation (WAF) in Ake, Abeokuta, the Ogun state capital on Wednesday.

The Roundtable Dialogue which was chaired by the newly appointed Head of Service in the state, Dr Nafiu Aigoro, was held to commemorate the 16th coronation anniversary of the Alake and Paramount Ruler of Egbaland, Oba Adedotun Aremu Gbadebo.

The initiative lamented that large population of Nigerians, especially those at the grassroots do not have access to essential health services.

The WAF’s Programme Director, Dr Omotola Akinmolayan said that due to the rising costs to access quality health care, the dialogue was imperative to bring stakeholders together considering that many low-income families may be pushed further into poverty if out-of-pocket payment is not discouraged.

Akinmolayan who noted that the programme was equally to promote health insurance amongst the Egba indigenes, argued that promoting health insurance is a collective responsibility of the government and key stakeholders.

The Director said “Our government is trying but cannot do it alone and that is why we are calling on the private organisations and Non-governmental Organisaions (NGOs) to work with the government so as to take health insurance to the desired level in the nation.”

“For now, less than five percent of Nigerians are under health insurance so we know that we can do more as a nation. WAF is supporting the effort of government by increasing advocacy among the people and working with government in tandem with their existing structure,” she added.

In her speech, the Commissioner for Health, Dr Tomi Coker, who was represented by Dr Afolabi Dosunmu, the Executive Secretary, Ogun State Health Insurance Agency stated that the current administration of Governor Dapo Abiodun is committed to the health of the residents of Ogun state, adding that the commitment is reflected through the ongoing upgrading of health facilities in the state.

The guest lecturer at the roundtable dialogue, Dr Anne Ene Adah-ogoh, a Public Health Physician from Christian Aid (UK) Nigeria said though the federal government is doing well in terms of health insurance, there is need to include the informal sector.

She stated “I think the FG has started well but what remains now is to include as many people that have not been included. They have provided quality services for those that have been included but more people need to be included, especially the informal sector because with the little we have done in the formal sector, we can see that health insurance is really working.”

She added “My call to other stakeholders is that this awareness needs to continue to encourage people who currently are not enjoying health insurance.”