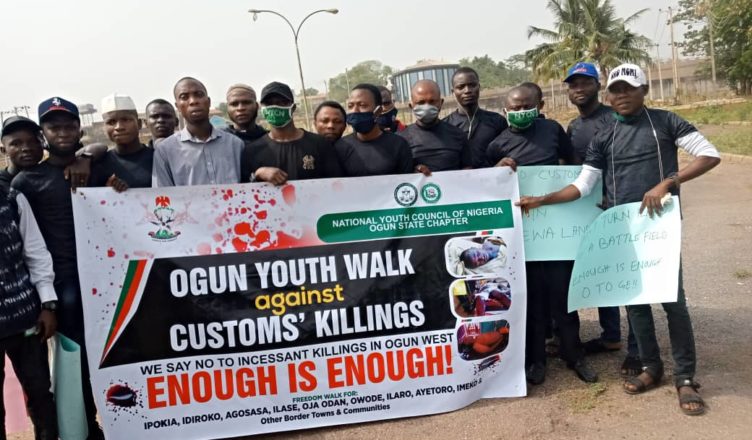 Ogun State House of Assembly has again sought the immediate intervention of the State Governor, Prince Dapo Abiodun alongside members of the National Assembly from the State on the need to address the incessant killings of innocent residents of the border towns in the State by officers and men of the Nigeria Customs Service.

Oluomo, noted that the killing of innocent people by the Customs men had become a major issue that required the immediate interventions of political leaders in the State and at national level, cautioning that the State borders should not be turned to Bakassi, hence the need for a roundtable discussion by all stakeholders to resolve the issue as the State could not afford to be in the news for the wrong reasons.

According to him, there was need for the men of the Customs to always adhere to the standard rules of engagements, so as to avoid the killing of innocent people in the State.

Earlier, in their presentations, the lawmakers lamented the invasion of communities and quarters in their constituencies by the men of customs, who often engaged in killing of people in the guise of looking for smuggled products, especially rice.

They said that last December, 22nd and 26th, the Customs men allegedly killed innocent people in Ayetoro and Oke-Ola in Ilaro, saying such invasions and killings had equally taken place at Ado-Odo township, Ejila-Awori, Joga, Oja-Odan and Ipokia-Idiroko amongst others.

In a related development, Youth under the auspices of the State chapter of the National Youth Council of Nigeria (NYNC) led by its Chairman, Comrade Abdul-Jabar Ayelagbe, led a group of protesting youth against killings of innocent people by the men and officers of the Nigeria customs and paid a solidarity visit to the Assembly, expressing their grievances on the unlawful killing of law-abiding members of the border towns in Yewa Axis of the State, with a formal presentation of their resolution on the act they described as unacceptable and inhumane to Speaker Olakunle Oluomo.

Ayelagbe noted that it had become a daily occurrence in the border communities including Owode, Ilaro, Ayetoro, Ipokia/ Idiroko and its axis for men of the Nigeria Customs Services to kill and injure innocent citizens unlawfully under the guise of checkmating the activities of smugglers, with a renewed appeal to the State Governor, Prince Dapo Abiodun to engage necessary stakeholders including the Federal Government to come to the aid of residents of the area.

Acknowledging the efforts of the State Assembly at identifying with the pains of the youth, the Chairman assured that the youth would continue to be law-abiding and peaceful in their respective conducts in the border communities but government should intervene as a matter of urgency.

Responding, the Speaker, who identified with the youth, stated that the Assembly had earlier passed resolutions calling for a stakeholders’ meeting with all concerned individuals and groups to put an end to customs’ incessant killing; adding that it would evolve more strategies to call the attention of the Federal Government through the representatives from the State in the two chambers of the National Assembly with an assurance that their communication would be transmitted to the State Governor, Prince Dapo Abiodun for necessary actions.

Meanwhile, in continuation of the on-going consideration of the State Audit Reports on Ministries, Department and Agencies, the Speaker has re-invited a former Managing Director of the State Property and Investment Company (OPIC), Barr. Jide Odusolu to appear before the House Committee on Public Account and Anti-Corruption led by Hon. Musefiu Lamidi on the activities of OPIC under his leadership on the 21st January, 2021 at 12 noon.