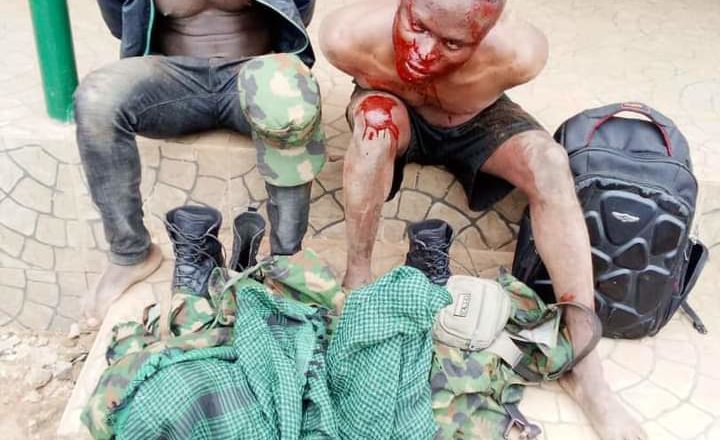 At about the same time seven fake soldiers, who escaped police arrest after engaging the Special Anti-robbery Squad (SARS) in a gun battle at Ijebu-Ife in Ogun State, early this month, were picked from their various hidings and paraded, another gang of military impostors have been smashed.

The four-member gang, who had overtime unleashed terror on residents of Sagamu and its environs, bit more than they could chew, as their expectation of having a usual field day on Tuesday, September 22, 2020, was dashed.

Two out of the four-member gang were nabbed and were on the verge of being lynched to death by an angry mob who effortlessly wrested them from police rescue.

The syndicate, Crime Puzzle gathered, alighted from a Toyota Sienna space bus on the fateful day at the popular Sabo Market in Sagamu and held traders therein spellbound.

According to Ogun State Police Command Public Relations Officer (PPRO), DSP Abimbola Oyeyemi, in a press statement made available to our reporter, the fake soldiers caused pandemonium in the market, beat up an elderly woman, and disrupted commercial activities.

However, while exhibiting this maddening act, a serving soldier, who apparently suspected their action as unmilitary, accosted and spoke to them in military language and, ostensibly unsatisfied with their response, demanded for their identities.

Sensing that the presence of the soldier would throw spanner into their operation, the suspects resorted to escaping on motorbikes, during which two successfully achieved.

The scenario that was in the public glare, spurred onlookers to reactions which, according to the PPRO, heightened their suspicion as fake soldiers and a distress call was made to the police.

“On the strength of the information, the DPO of Sakura Division, CSP Dahunsi Ronald, quickly led his patrol team to the scene where two of the suspects were arrested with the help of members of the public”, the police spokesman said, adding that, “The angry mob descended on them and attempted hijacking them from the officers for instant justice”.

Oyeyemi stated that, the detectives’ intuition to whisk them away in the face of tensed atmosphere, saved them from the mob’s intent of sending them to their early graves.

The arrested suspects, from whom two pairs of Army camouflage uniform, two pairs of black boots, one camouflage vest, one camouflage fez cap, one Samsung phone and a sum of Ten Thousand, Eight Hundred Naira (N10,800) were recovered, according to the police image maker, were Joseph Uzor and Obadeyi Quadri, both 27 years of age.

Oyeyemi further stated that, “They are strongly suspected to be part of the robbery syndicate operating in military outfits along Sagamu Benin Expressway, some of whom were recently apprehended and paraded”.

He said that the state Commissioner of Police, Edward Awolowo Ajogun, had ordered the immediate transfer of the suspects to the State Criminal Investigation and Intelligence Department (SCIID), Abeokuta, for discreet investigation, even as he directed an in depth investigation into their past activities before arraigning them before a court of competent jurisdiction.