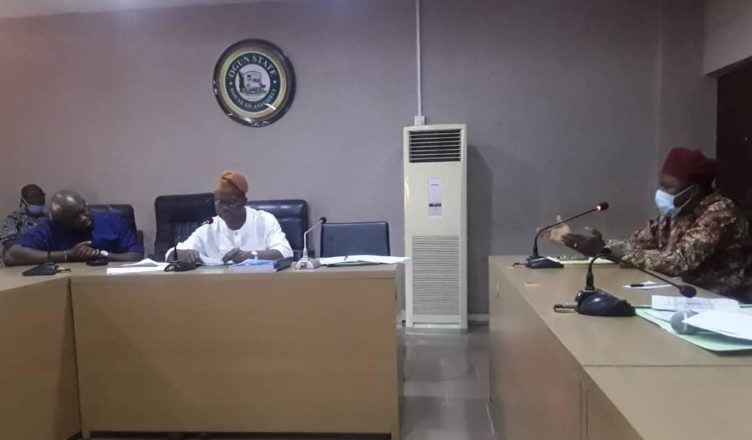 The Ogun State House of Assembly through its House Committee on Public Accounts and Anti Corruption led by Hon. Musefiu Lamidi, has again directed the State Bureau of Lands and Survey to immediately furnish it with relevant documents relating to all costlines including those containing the construction of ICT Infrastructure running into over N400m carried out in 2016 as well as the list of all non-committed acquisitions along Abeokuta-Sagamu.

Hon. Lamidi, who issued the directive during the Committee’s meeting with a former Director General/ Special Adviser to the former Governor Ibikunle Amosun on Lands and Survey, Mr. Biyi Ismail in continuation of the consideration of the Audit reports between 2015 and 2019 at the Assembly Complex, Oke-Mosan, Abeokuta, urged the former DG to reappear before the Commmitee on Friday, 20th November, 2020.

The House Committee Chairman, who warned the Director of Finance and Accounts of the Bureau, Mr. Usman Ojelabi, from hoarding necessary information from the Committee, further requested for the list of land allocation at Flowergate between 2015 and 2019 as well as that of all commercial allocation at River-View in Isheri for the same period.

While reeling out some of the infractions committed by the Bureau during the period under consideration, Hon. Lamidi stated that the Audit queries including wrong classification of expenditure, keeping of dormant account to the tune of N9.4m as well as lack of pre-audit checks by the internal auditor amongst others were against due process.

Lamidi equally observed that the revenue achievement of the Bureau dropped from N10.6bn to N3.1bn, when considering 2018 against 2019 report signifying 70% reduction from the various revenue streams, pointing out that the large reduction on the revenue was on plot allocation and layout fees which the Bureau needed to clarify.

He urged the management of the Bureau to furnish the Committee with the necessary details including bank statements on all accounts, supporting documents to all cost lines and bank reconciliation amongst others on or before 3.00pm on Wednesday 18th November, 2020; just as the former DG of the Bureau alongside the Management team should report back to the Assembly on Friday, 20th, 2020 at 10.00am prompt.