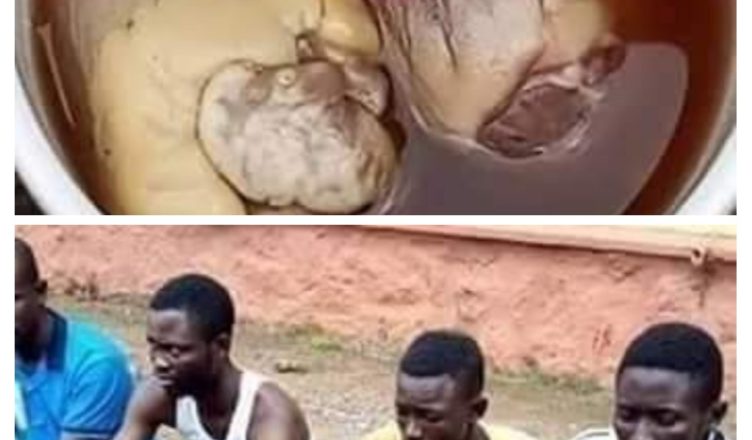 Four suspected ritualists have been arrested in Ijebu-Igbo area of Ogun state with fresh human hearts.

The Suspects Nurudeen Adeniyi 34,Tunde Banjo 29,Temitope Alaba 20,and Tobi Olukoya 20 have confessed to the crime and cooling their feets with the security operatives.

The prime suspect Nurudeen Adeniyi,said”I am a business man, I sell cement and rice and I am an Alfa. I told him (Banjo) that I need human heart and he said he has a man that can get it for him. I just take the delivery of this one (hearts) and I have collected two pieces two years ago.
I am not the person that used the one I collected two years ago, the person that used that one is dead now. I want to use the parts for “eyonu, ebe awon agba.” I regret my actions and I want Nigerians to forgive me”

While responding,Tunde Banjo who claimed to be an herbalist said,”This my brother asked me that he needs breast and female genitals and one day I was playing in my house and I see this guy with his friend and I told them that one of my brothers need this thing and he said he could get it for me. He called me one day that he has seen a lady. I was not there when they killed her o but she was killed in my (herbalist) office.”

Another suspect,Temitope Alaba who claimed to be an apprentice in an herbalist office, said “I was there when they killed the girl but I wasn’t the one that killed her. I am an herbalist apprentice. The girl was killed with a knife. It was Tobi and ‘Asa’ (nickname) that killed the girl. They brought her from Ago Iwoye area.
When the lady was resisting sexual advances from them, they hit her with a charm and she couldn’t say anything again.”

Another suspect Tobi Olukoya, innocently looking naive said,”I was outside, I don’t know how pepe and Tope killed her. They told me they needed women breast and private part and if I could lure a girl to their place, they would give me 30 thousand naira. But they only gave me 500 naira.”

The Suspects will be arraigned soon.