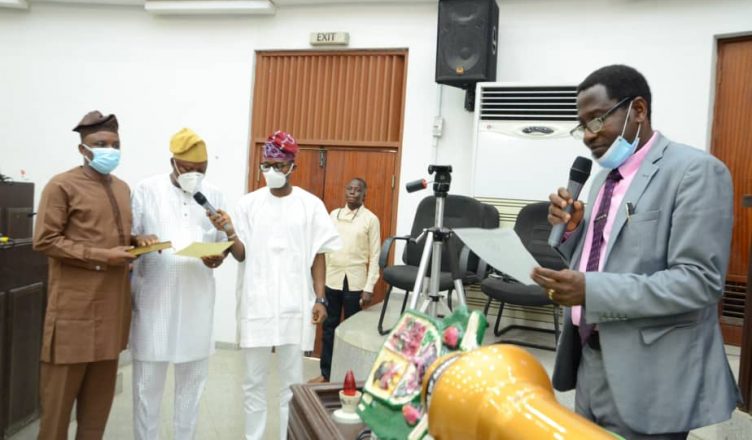 The election was sequel to his nomination by a member representing Remo North State Constituency, Hon Solomon Osho, seconded by his Ijebu-North East counterpart, Hon Abayomi Fasuwa and was unanimously supported by other lawmakers at a plenary presided over by the Speaker, Rt. Hon. Olakunle Oluomo at the Assembly Complex, Oke-Mosan, Abeokuta.

Earlier before conducting the nomination exercise, the Clerk and Head of Legislative Service, Mr. Deji Adeyemo, presented a report on the vacancy in the office of the Deputy Speaker, after which the voting process was concluded upon the acceptance of nomination by Balogun, who thereafter took the Oaths of Office and that of Allegiance respectively as administered on him by the Clerk.

In another development, the Assembly has confirmed the nomination of the Governor Dapo Abiodun’s nominee, Mrs. Remilekun Olaopa as a member of the State Independent Electoral Commission (OGSIEC) having screened and found her eligible and suitable for the position.

The confirmation was sequel to the adoption of the report of the Selection Committee as presented by the Majority Leader, Yusuf Sheriff, who also moved the motion for its adoption which was seconded by Hon. Ajayi Bolanle and supported by other lawmakers.

It would be recalled that the lawmakers had during the screening conducted on her the previous day, considered the curriculum vitae of the nominee, with a charge on her to work with other members of the Commission towards ensuring the conduct of a peaceful, free and fair local government election in the State upon confirmation by the legislature and subsequent approval by the State Governor.