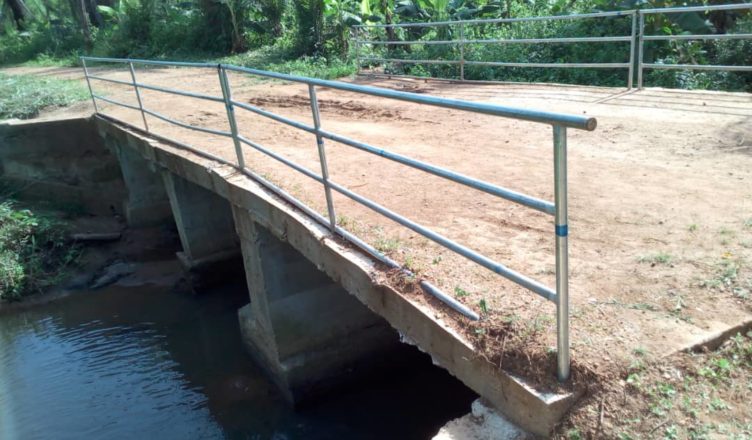 In a bid to bring succour to the people of Igbasa, Okeyejo, and Imedu-Ibadan/Ijebu-Ogbogbo communities in Ijebu North-East Local Government Area, Ogun State Government has reconstructed a bridge which collapsed 20 years ago.

Speaking at the commissioning of the project at Ijebu North-East, the State Governor, Prince Dapo Abiodun said it would aid the movement of vehicles and farm produce, as well as improve socio-economic activities of the council area.

The Governor, who was represented by Commissioner for Local Government and Chieftaincy Affairs, Hon. Afolabi Afuape, added that “it is the responsibility of government to ensure adequate welfare of its citizens, this is why the present administration is committed to creating enabling environment for Local Governments.

Abiodun, commended the Transition Committee members for the choice of projects embarked upon within their short stay in office, despite various challenges in the country.

“Sincerely, I want to commend the effort put in by the authority of this Local Government. This is a worthwhile project and I am delighted about it”, he submitted.

In his welcome address, the Transition Committee Chairman of the council area, Tpl. Odunola Olusegun lauded the Governor for his support, assuring other communities that their needs would be attended to.

He enjoined the people to make proper use of the projects and reciprocate the State government’s gesture by demonstrating their loyalty and support for the present administration at all times.

Other projects undertaken by the Transition Committee Chairman were, repairs of council’s graders, energisation of 100/33KVA Transformer at Odogogo and construction of a Block of Ultra-modern toilet at Epiphany Primary School, Eruwon.

In their remarks, the Baale of Igbasa Okeyejo, Chief Moses Odumade and Chairman, Community Development Association, Chief Adeyemi Titus appreciated the government and the LGA Transition Committee for the intervention, saying the projects were timely and promised to adequately protect them.

In a related development, the people of Ijebu North Local Government Area have been told to protect infrastructures provided and cultivate the habit of maintenance culture.

The Governor, Prince Dapo Abiodun gave the charge, while commissioning some projects executed by the Transition Committee of the council area, led by Hon. Yekeen Jayeola, saying the assistance rendered to the Local Governments would allow them to perform their roles as the closest government to the people.

“It is our decision to give the council areas free hand to perform their roles. We are still standing by our promise and this is what you are witnessing today, as we commission different projects in all our Local Government Areas”, Governor Abiodun said.

In his welcome address, Transition Committee Chairman, Hon. Jayeola applauded the Governor for keeping his promises, noting that his committee has completed a borehole at Oru Awa and a block of two classrooms at St. Joseph Primary School, among others.