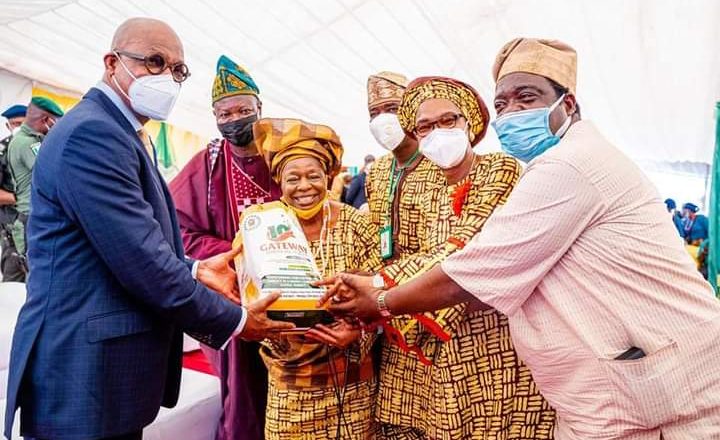 Ogun State Government has said it will in two weeks time, flag-off the construction of the Agbara-Lusada Road, to ease vehicular and pedestrian movement in the axis.

Governor Abiodun, who stated this at the opening ceremony of the 10th Gateway International Trade Fair, tagged, “Transforming Agriculture and Commerce in a Highly Competitive Global Market”, held at the Trade Fair Complex, Oke-Mosan, Abeokuta, also disclosed that Ogun State Small and Medium Scale Enterprise Intervention Fund, for technology based business, would be launched soon.

“This administration has embarked on massive road construction and rehabilitation across the State including roads to industrial hubs. We will be flagging off the construction of Atan Lusada Agbara road in the next 2 weeks. We are also paying attention to rural roads to boost agriculture and development of Micro, Small and Medium Enterprises (MSMEs).

“We are developing MSMEs clusters across the state that will be provided with full infrastructure of roads, drainage, power, and fiber optics that would be offered at attaractive pricing and flexible payment terms to further encourage to incentivize MSMEs.

“We will soon be launching the Ogun MSMEs development fund geared towards providing easier credit facilities. We will also be launching an innovation fund for Tech-based MSMEs”, he said.

Abiodun also noted that it was time for the country to explore other sectors to boost her economy, adding that if sectors like agriculture, trade and manufacturing, were given the needed attention, it would go a long way in making the economy viable and sustainable.

“The agricultural sector remains the cornertone to our economy and, if well harnessed, will put our economy development at a very fast pace.

“Diversification into non-oil sector has become imperative if we must make use of our abundant human resources and improve on local production and consumption. We need to reduce import rate, improve export and earn more foreign exchange to boost our economy”, he said.

Noting that the Gateway International Trade Fair had over the years contributed to the economic and industrial growth of the State and the nation, he expressed hope that this year’s edition, would also serve as an avenue to cross-fertilize ideas to bring about the diversification agenda that would help address the nation’s economic challenges.

Abiodun noted that the fair would further provide an opportunity for business men and women to showcase their goods and services to the outside world, enhance corporate partnership and bilateral relations among countries through exchange of notes on trending issues with potentials for economic growth.

The establishment of the Investment Promotion and Facilitation Agency, the Governor noted, was to provide useful information for perspective investors on business opportunities in the State and the massive reconstruction of alternative roads to link major roads to ease movement of agricultural produce, goods and services, was the administration’s commitment towards promoting investments and industrialization.

Prince Abiodun stressed the administration’s commitment towards promoting a private sector driven economy and re-assured prospective and existing foreign and local investors that his administration would continue to put in place necessary machinery toward sustaining the socio-economic development of the State.

Speaking, Commissioner for Industry, Trade and Investment, Mrs. Kikelomo Longer, said trade fairs are held around the world to showcase variety of products and services and to launch recent inventions, adding the State would explore the opportunities offered by this year’s trade fair to propagate the administration’s efforts at attracting investors to the State.

Commissioner for Agriculture, Dr. Adeola Odedina, on his part, noted that agriculture was the major supplier of raw materials to industries, adding that the State was leading in the production of cassava, poutry, eggs and vegetables in the country.

In his welcome address, President, Ogun State Chambers of Commerce, Industry, Mines and Agriculture (OGUNCCIMA), Alhaji Babatunde Olaleye, while lauding the present administration for engaging the Organised Private Sector (OPS) in policy formulation, opined that it was time for Nigeria to leverage on the African Continental Free Trade Agreement (AfCFTA), by exposing her manufacturing and non-oil sectors to the outside world, as the Agreement has opened the window of opportunities for the country to enhance her status as the economic giant in Africa.