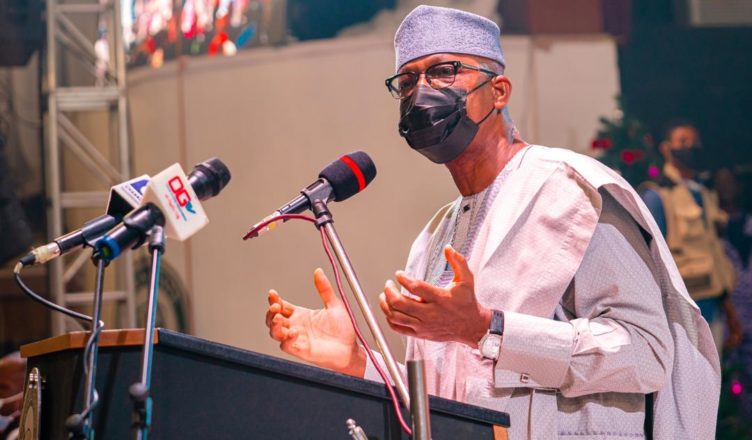 Ogun State Governor, Prince Dapo Abiodun has pleaded with Nigerians to guide against acts that would trigger the second wave of Covid-19 pandemic, has the country was yet to fully recover from the first wave.

The Governor who made the call at the State organised Christmas Carol and service of nine lessons held at the June 12 Cultural centre, Kuto, Abeokuta, described the out going year as turbulent and full of uncertainty as the Covid-19 Pandemic has succeeded in dislocating the nation’s socio-economic activities of the country this year.

Governor Abiodun disclosed that the second wave was real, as more than 1000 new cases have been recorded so far across the country in the few days, stressing the need for the people not to loose guard, but continue in observing the laid down protocols to contain the pandemic.

He noted that despite the pandemic, his administration was able to implement its policies on infrastructure, social well-being, education, youth development and agriculture, attributing successes recorded so far to the unflinching support of the people.

The Governor pointed out that his administration was able to sustain its leading role in the production of poultry, eggs, cassava and rice in the South West, saying that the resilience of his government not to succumb to the pandemic, was not left unnoticed, as he was given an award as the best Governor in the Agric, Housing sectors as well as the best administration in education by the National Parents Teachers Association.

Prince Abiodun said with the awards and the support of the people, his administration was poised to do all it could to maintain and sustain its leading role in agriculture, housing and other critical sectors of the State’s economy.

“The Pandemic afforded us the opportunity to further support our farmers with various inputs, all our efforts have not gone unnoticed because we won the Governor of the year in affordable housing and agriculture and the Parents Teachers Association also gave us the administration of the year in education,” he said.

Abiodun while commending youths in the State for speaking out during the recent protest to end the activities of the Special Anti-Robbery Squad (SARS) in the country, expressed delight at the way the youths in State went about their protest by not looting and turning to miscreants over night, assuring of constant dialogue with the youths while commending the traditional rulers for the role they played during the protest.

“I must not fail to mention and appreciate the Ogun State youths for the way they conducted themselves during the ENDSARS protest, I am glad that Ogun State youths also said we are not also happy, we are also hungry, but, we are not looters, we are not miscreants and I think that is something that is very profound and we have responded immediately with the set up of the Ogun Youth Empowerment Scheme which would enable us to take 5,000 of our youths by placing them on immediate benefits while we train them on different trades.

“My promise to them is that we are not going to leave them, we are going to continue to dialogue with them, I will ensure that we continue to empower our traditional institutions who were very helpful during the trying times of the ENDSARS protest,” he said.

Governor Abiodun while urging the people to be compassionate to one another during this Yuletide, admonished them to celebrate with moderation and be responsible in their actions, as Christmas was all about love and sharing.

“Christmas is a season of love, it is a season where you must show each other compassion, let us go out of our way to be nice to one another, it has been a very tough year, a year where people have lost their jobs, a year where businesses have closed down, let us find ways and means to touch other people by being kind to them, this is the true essence of Christmas.

“But let us ensure that as we celebrate this year, let us celebrate with moderation, let us be responsible in this year’s celebration, we need to be responsible, this is not the time to play Russian roulette with our lives,” he said.

In his sermon titled, “Why did Jesus come”, the South West Regional Co-ordinator of The Redeemed Evangelical Mission (TREM), Bishop Reuben reading from the books of Luke, Chapter 2 verse 7 and John, chapter 1, verse 11 said that some people misconstrue Christmas as a season to merry and exchange gifts.

Bishop Oke noted that though the season meant different things to different people, the reason for the season was for Jesus Christ to give life by paying the debt for sinners.

The clergyman blamed the nation’s leaders for plunging the nation into its current socio-economic and political travails, urging the people to always be reminded that they are alive because of God’s mercy and Grace.