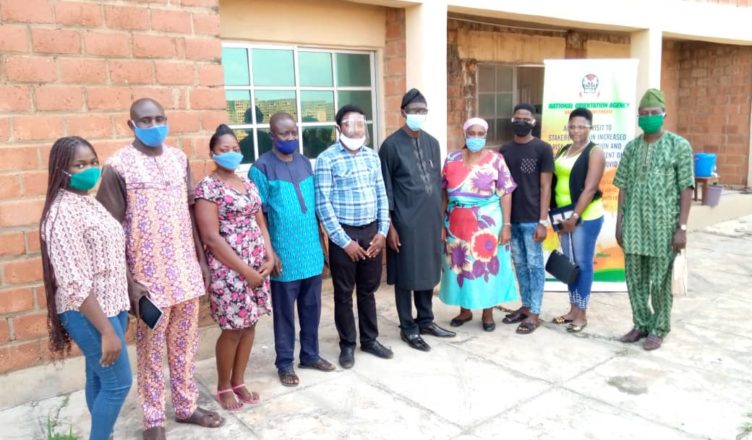 The uncomfortable surge of the deadly Corona Virus which some people especially in Nigeria considered a “number game” as a result of the daily infectious figure rolled out daily as confirmed in Nigeria by the National Center for Disease Control, NCDC, the National Orientation Agency, NOA, approached the Coalition of Civil Society, CSO, in Ogun State, during a meeting on the possible need for partnership against Covid-19 pandemic tagged, “Advocacy Visit to Stakeholders on Increase Risk Communication Engagement on the Containment of Covid-19 in Ogun State.

Addressing the meeting on their mission to engage the CSO, the State Director, NOA, Mr Sola Babalola, stated that there is need for collaboration with the CSO in the fight against Covid-19 containment in the State describing the latter as Critical Stakeholder, so as to further assist in the areas of information, sensitization, education against the viral disease. He reiterated that the Government agency was ever ready to give necessary support in such direction as a lot still need to be done.

The NOA gaffer, further stated that community transmission is on the increase as evident, sequel to the eased lockdown in respect of citizens flagrant disregards to Covid-19 guidelines as directed by relevant health authorities such as the proper use of the face mask and hands washing, avoidance of large crowds amongst others by taking responsibility and ensuring the needful was done, neglecting and deserting elements in the society who were still denying the factual existence of the pandemic.

Other Stakeholders expected to be targeted as highlighted by the Director in the proposed mutual relationship were stated including, Traditional Rulers, Religious Leaders, Transporters, the Media, Youths, Women amongst others.

In his response on behalf of the CSO, Ogun State Chairman and the Former National Secretary, Committee for the Defence of Human Rights, CDHR, Comrade Yinka Folarin assured the NOA Director in the State of the CSO readiness to support his giant stride noting that the organization he represented (CDHR), as well as the Women’s Organization for Development and Empowerment of Communities, WODECO, among others had in the past collaborated with the Orientation Agency in various areas but would step up as well as carry others along to ensure the Agency achieve it aims and objectives as planned.

Corroborating Comrade Folarin assertion, the Coalition Secretary, who is also the Executive Director of WODECO, Comrade Mrs, Mary Ajayi, expressed her dissatisfaction over disregards to Covid-19 preventive guidelines by the populace noting that they had engaged in advocacy and relief programmes, also joined issues with the NOA in the past as this call would geared them up to do more.

Thereafter, was the presentation of relative flyers and posters for distribution and possible placement to the Coalition Chairman by NOA Director in the State with inscription and images aimed at ensuring further enlightenment and education against Covid-19 were tenable.

Recent development,has it that the Russian President, Vladimir Putin claimed his country had developed a vaccine for Corona Virus cure know as “sputnik” as Nigeria’s confirmed case on the viral infection edges 50,000.