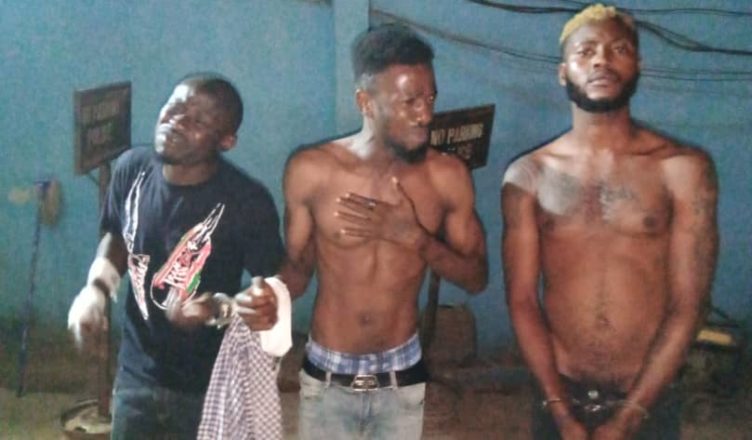 Three members of Eiye confraternity were on 28th of January 2021 arrested by men of Ogun state police command for threatening to kill one Teslim Lateef on his refuser to be initiated into their group.The suspects; Olajide Shittu m’ 32yrs, Emmanuel Fidelis m’ 29yrs and Sunkanmi Ifelodun m’ 39yrs were arrested following a report lodged at Ajuwon police station by Teslim Lateef who reported that the three suspects have been threatening to kill him for quite some time over his refusal to be initiated into Eiye confraternity despite their persistent appeal to him. He explained further that they promised to eliminate him since he has known them to be members of their group so that he will not expose them.

On the report, the DPO Ajuwon division SP Andrew Akinseye who has been monitoring the suspects led his men to their hideout where the three suspects were apprehended. It was reported that they have all confessed been members of Eiye cult group and that they were trying to recruit more members into their fold.

Meanwhile, the commissioner of police CP Edward Awolowo Ajogun has ordered the transfer of the suspects to state criminal investigation and intelligence department for discreet investigation.

The CP also warned cultists in the state to make use of the opportunity given to them by the command to renounce their membership of those evil groups before the long arm of the law caught up with them.