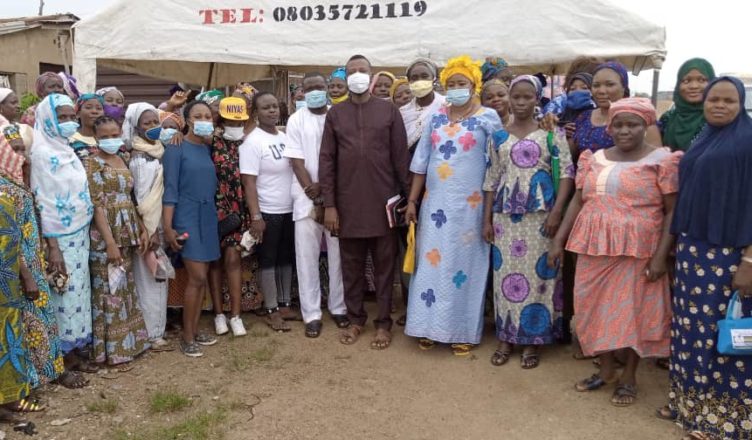 Members political support group of Governor Dapo Abiodun of Ogun state, Dapo Abiodun Likeminds (DALM) have passed vote of confidence on its State Coordinator, who is also the Special Adviser to the Governor on Inter-governmental Affairs, Asiwaju Adewale Nurudeen.

The group equally declared their total support for the administration of Governor Dapo Abiodun.

The group at its inaugural meeting held yesterday at Soyoye, Ward 16, Oke-Ogun in Abeokuta North local government said the achievements of the Governor in the last 15months have proven that Governor Abiodun is a true democrat.

They therefore appealed to the Governor to speed completion of ongoing construction of Lafenwa/Rounder road, saying the zone have been marginalized and deprived of dividends of democracy for over 20years.

According to Mrs. Adejoke Balogun Oke-Ogun has always been relegated in terms of infrastructural development and dividends of democracy.

She said, “We at Oke-Ogun are really suffering. We have the highest votes in Abeokuta North and we are the ones that suffered most.

“We are always relegated. We don’t enjoy any dividends of democracy in terms of infrastructural development, social amenities and political appointment.

“We don’t have representation in Governor Abiodun’s cabinet, so, we are humbly appealing to His Excellencyto let us produce the next Chairmanship candidate for APC so that, we can have sense of belonging in this government.”

Speaking earlier, DALM Coordinator for Abeokuta North, Mr. Akinyele Ogunpola thanked members of the group for their large turn out at the inaugural meeting of the group in Oke-Ogun.

Ogunpola assured them that, all the wards in Abeokuta North would be visited to spread the good news of Governor Dapo Abiodun’s administration to the grassroots.

“It brings me joy to welcome you all to this strategic meeting aimed at championing for the success of our amiable, silent but workaholic Governor, His Excellency, Prince Dapo Abiodun, MFR.

“This will no doubt, metamorphose into the progress of our great party, APC across the length and breadth of Ogun state.

“As we all know, Dapo Abiodun Likeminds (DALM) is a group of people with the same ideologies, visions, beliefs, focus and sincerity of purpose with our principal, His Excellency, Prince Dapo Abiodun under the leadership of our resilient Chairman, who also doubles as the Special Adviser, Special Duties and Inter-governmental Affairs, Asiwaju Aka Adewale Nurudeen.

“These are also the watch words of the Governor which are aimed at achieving a successful economical, infrastructural, educational and political development of ﻿ Ogun state and also the security of lives and properties of Ogun citizens at large.

“It is also on record that, since the inauguration of this noble group, we have empowered over 500,000 across the state. During the pandemic, we gave out palliatives to our members to cushion the effect of the lockdown in the state and our State Coordinator has asked me to tell you that, we shall empower another 500,000 members of the group on different vocations.

“However, we shall continue to do more if we all support the administration of Governor Dapo Abiodun and our leader, Asiwaju Adewale Nurudeen. Many of our members will secure job employment and we shall soon roll out scholarships for our party members.”