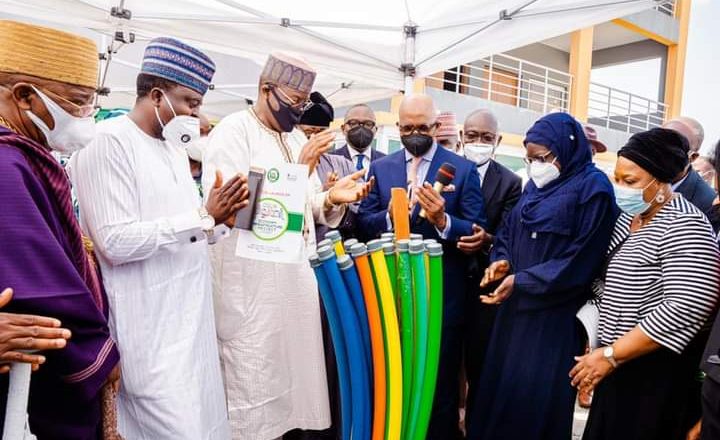 Osinbajo gave this commendation while speaking virtually at the official launch of the project, held at the Ogun TechHub, Kobape Road, Abeokuta, the state capital.

The VP noted that digital economy technology is the future of all aspects of human existence such as business, education, healthcare, governance, security, and the practice of practically every profession, lauding Abiodun for his initiative of bringing broad-band to homes and businesses in Ogun.

He added that with the launch of the project, Ogun is taking hold of the future, saying making digital access available to all the citizens and businesses remained the most far-sighted action any government can take in the present time.

While saying the project is a critical component of President Muhammadu Buhari’s objectives of broad-band connectivity for all by 2023, Osinbajo emphasised that access to broad-band and modern technology tools have become compulsory for any community that seeks meaningful growth, security and prosperity for its people.

“Indeed access to broad-band and modern technology tools have become compulsory for any community that seeks meaningful growth, security and prosperity for its people. So, I will like to commend our futuristic, dynamic, innovative and digitally compliant governor, Dapo Abiodun for credible and relevant initiative by bringing broad-band to homes, businesses and offices in Ogun State; you’re opening up Ogun State residences and businesses digitally not just across Nigeria but to the entire Universe.

“This project is a critical component of Mr President’s objectives of broad-band connectivity for all by 2023. This ambition as you know is now enshrined in our Economic Sustainability Plan and as part of National commitment to make broad-band connectivity available to all. You will re-call that in 2017, the state governors under the auspices of the National Economic Council agreed to harmonize a right of way charges payable by telecommunication companies and related public utility infrastructure on local governments, states and federal gighways to encourage co-location of the companies that fiber the cables.

“In another demonstration of government’s commitment in this regard, the Federal Ministry of Communication and Digital Economy launched a National Broad-band Plan which is designed to deliver data downloads units across Nigeria with a minimum of 25ABPS in urban areas and 10MPPs in rural areas with effective coverage available to at least 90% of the population by 2025 at affordable prices”. Vice President Osinbajo stated.

Earlier in his address, Governor Abiodun noted that the FG’s initiative of the National Digital Economy Policy and Strategy (NDEPS) as being supervised by the Federal Ministry of Communications and Digital Economy have yielded positive results.

He added that positive effects of the deployment of ICT towards resolving various challenges have culminated in creating more employment opportunities and poverty alleviation.

While noting that a thriving digital economy will enable the people, especially the youth, to take advantage of information superhighway and new technologies to become leading players in the globalized world, Abiodun pointed out that “digital economy will serve as a viable platform for strengthening the economic diversification as well as the attainment of many key national objectives of fighting corruption, improving security, job creation and expanding the economy”.

He added that his administration has continued to demonstrate commitment towards developing the ICT industry for the continued growth and expansion of all sectors of the economy, stressing that “the fact is that developing and leveraging on digital resources will provide us a sure way to harness a globally competitive citizenry and economy in our dear state”.

“This digital economy infrastructure is the backbone for ICT revolution in our dear state. This will further enhance the ease of doing business in our state. Recent events have even shown the various roles of digital technologies in solving many human challenges and transforming every aspect of the economy. Therefore, this particular effort of our administration of providing a digital economy in Ogun State will not only help to resolve many challenges, both human and economic, but also provide more opportunities to improve the people’s know-how, productivity and innovations as necessary for nurturing their potentials and the continued development of our State’s economy.

“The formal launch of the Ogun State Digital Economy Infrastructure Project (OGDEIP), today, is to formally deepen the various advantages of information technology advancements into all sectors and making ICT one indispensable point of our economy. The ICT industry has continued to account for more than 21% of our dear state’s Gross Domestic Product, and hence continued to provide countless job opportunities for our growing educated and creative citizenry. And, as we are putting efforts towards improving on our status as the Industrial Hub of the nation and the investors’ destination of choice, as well as the education capital of the country, by providing an enduring legacy in digital economy at a full capacity at this time is very apposite”. Abiodun stated.

The governor, however, disclosed OGDEIP in collaboration with private company will provide broadband connectivity to every corner of the state by delivering fibre-optic cables and mechanics across all the 20 Local Government Areas within the next two years.