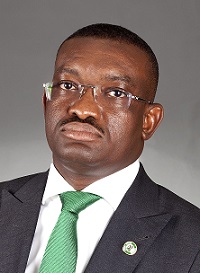 …sold 8.2 Hectares of land at Isheri, undervalued at ₦164M in the twilight of the last administration.

Ogun State House have passed the report of its Committee on Public Accounts and Anti- Corruption, which considered the 2015-2019 State Auditor-General’s report on the State Property and Investment Corporation, (OPIC) and therefore called on the financial crimes investigation agencies to investigate and recover into the State’s coffers, the unaccounted balance of ₦2,579,771,717.71 which happened during Barr. Babajide Odusolu’s tenure as the the Managing Director of the Corporation.

The house also directed the former Managing Director to pay back the sum of N40m that was unaccounted for in Year 2019 into the State Government’s purse within six months from today.

The passage of the resolution was consequent upon the presentation of the report of the Committee on the consideration of the State Audit report on OPIC by the Chairman,Hon Musefiu Lamidi, who equally moved the motion for its adoption, seconded by Hon Oludaisi Elemide and unanimously supported by other lawmakers through a voice vote at the plenary presided over by the Speaker, Rt. Hon. Olakunle Oluomo at the Assembly Complex, Oke-Mosan, Abeokuta.

The Assembly equally recommended the reversal of all transactions including the 8.2 Hectares of land at Isheri sold in favour of Rainerhill Internationals Services Limited, a subsidiary of Pesianas Group in the twilight of the last administration at the undervalued price of N164M, stating that it was not done in the best interest of the State; hence all relevant title documents issued in favour of the aforementioned company in relation to the land was declared null and avoid, while the Corporation should retain the land ownership.

Also, the Committee declared that a retrospective legislative approval be secured for the expended unbudgeted sum of ₦881.5M, failure to which the Corporation’s erstwhile Managing Director, Odusolu was expected to refund same amount to government’s coffers within a deadline of six months.

The Assembly added that the embargo placed on the whopping sum of N608, 226, 371.69 in 16 banks accounts be lifted to enable the Corporation have access to the funds for developmental projects and investments.

It further directed that in line with the observation of the Committee, the proposed 5-star Hotel, Ikeja which had no physical existence, yet a whopping sum of ₦45, 025, 064:00 was expended to obtain title documents on the landed property and no satisfactory reason was given by the Corporation for such expenditure, holistic investigation should be carried out to reflect the company’s true position.