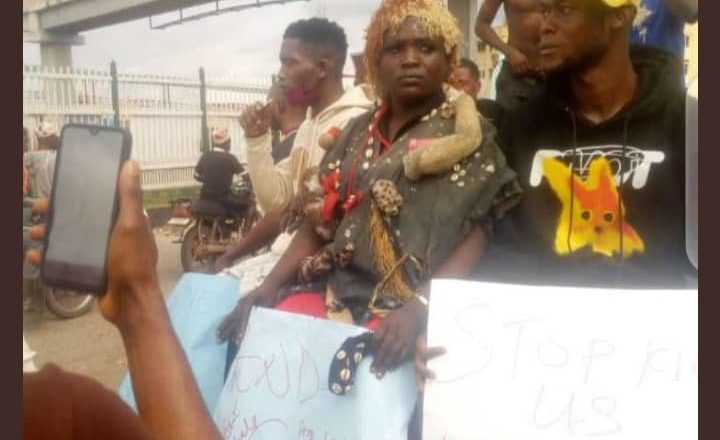 Ogun State Governor, Prince Dapo Abiodun, on tuesday appealed to the youth and #EndSARS demonstrators in the state to be peaceful, calm and civil in their conduct and not allow the lofty idea behind the protest to be hijacked by hoodlums and self-serving people. On the other hand, the Governor also enjoined the security agencies to always exercise great restraint and avoid use of force in managing peaceful protests.

In a statement in Abeokuta, Prince Abiodun, through his Chief Press Secretary, Mr Kunle Somorin, identified with the objectives of the protest against law enforcement agencies brutalising the citizens, insisting peaceful protest is a legitimate way of showing grievances against perceived high-handedness or injustice with any system.

This was the reason why the governor had ensured that all the demonstrators arrested in the wake of the protest in Ogun State have been released, including the three suspects that were arraigned in court and remanded in a custodial centre on 12 October 2020, following his instruction to the State’s Attorney-General that Ogun State would not press the charges against them.

In addition, the State promised to facilitate investigation into any act of brutality of citizens by law enforcement agencies, compensation of the victims, identification and holding the erring law enforcement officer accountable.

The Governor however, pleaded with the youths that conduct capable of breach of public peace and safety may also lead to undesirable outcomes that run counter to the reason for the protest in the first instance. He said,”the youth should allow the planned reform of the police, starting with the immediate disbandment of the Special Anti-Robbery Squad (SARS) and other measures already announced by President Muhammadu Buhari.

Ogun State Government will continue to maintain keen interest in the planned police reform and ensure that the desired and lasting changes that make will Nigeria Police a professional, people-centred, and responsive public institution that operate within the ambit of the law are achieved.”

Prince Abiodun also added that,“we as elected officials are elected to serve the people. We derive our mandate from their consent and are obliged to defend their rights at all times. Their welfare and security are the primary purpose we are in Government. Besides the mandate of the electorate, I am also a father and can relate to the pain of brutality or harm being inflicted on innocent youth, particularly by public institution charged with the responsibility of protection of life and property.”

“On this issue, people’s voices have been heard loud and clear all over the nation and even beyond and the government at various levels, particularly the federal government, have listened and initiated a number of steps that demonstrate commitment to fulfilling the yearnings of Nigerians. I therefore plead with our youth to please bring an end to the protests that sometimes lead to stampedes and accidents and allow the process of the planned reform to progress. Reform and development can only happen in an atmosphere of peace and security”, Governor Abiodun concluded.