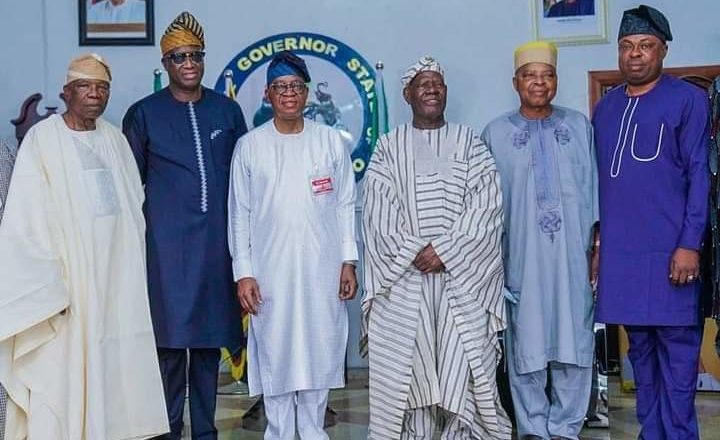 …say Oyetola has done excellently in managing the incidents

Some elders in the State of Osun have condemned in its entirety, the wanton destruction and looting of government and private property across the State by hoodlums under the guise of EndSARS protest.

But they extolled the leadership quality displayed by the Governor, Adegboyega Oyetola, in managing the incidents in the State, including the attack on him (the Governor) by hoodlums.

The elders, led by a former State Governor and the Pioneer Interim National Chairman of the All Progressives Congress (APC), Chief Abdul-Kareem Adebisi Akande, who were on a solidarity visit to the Governor, at the Government House, Osogbo, described the attack as unfortunate, unwarranted and alien to the Omoluabi ethos for which the State was known.

The former governor warned the miscreants and those who have participated in the break down of law and order across the State to refrain from such acts.

Speaking further, Akande acknowledged the Governor for systematically addressing the demands of the protesters in spite of the mayhem unleashed on him and his entourage.

He said “We, as friends with common concern in the affairs of Osun State, are here in solidarity with our Governor, Adegboyega Oyetola, on the fallout of the #EndSARS imbroglio.

“We sympathised with the Governor over the attack on him by hoodlums who evidently hijacked the protests in Osogbo. The attack was unfortunate, unwarranted and alien to the Omoluabi ethos for which we are known.

“We recognise and identify with the merit of the agitation by our youths, which initially was over acts of brutality by some officers and men of the Special Anti-Robbery Squad (SARS) which grew into a wider clarion call for general reforms.

“We support the clamour for a total end to acts of brutality from whichever source. We sympathise with those who have lost loved ones and those who have been injured during this struggle.

“The wanton destruction and looting of government and private properties across the state by hoodlums is highly condemnable. Attacks on security personnel are counterproductive and only seek to erode recent gains.

“We again acknowledge the Governor for systematically addressing the 5for5 demands of protesters and again appeal to our youths to give dialogue a chance, for peaceful resolution of their grievances and demands.

“We plead with our business leaders and investors not to be discouraged by these isolated acts of lawlessness and remain committed to investing in our state with a view to creating jobs and offering employment to our teeming youths.

“We admonish the State and Federal governments to demonstrate magnanimity, courage and forthright leadership in timeously solving the requests of our youths.

“These exuberant youngsters remain the pillar and fulcrum of our unity, upon which we can attain greatness, having broken national and global records in sports, science, academics, medicine and other areas of human endeavours.

“Let us join hands with governments in their bid to deliver on all their electioneering promises emphasis of which should be in the areas of social enlightenment, education and agriculture.”

In his remarks, the Governor of the State of Osun, Adegboyega Oyetola, appreciated the eminent citizens on their solidarity visit, describing it as an encouragement for him to be more dedicated, committed and determined to do things that will continue to bring genuine development to the people and the State.

Oyetola who narrated his ordeal on the attack on him, said “if not for God, I would have been killed by the hoodlums”.

He condemned the attack, which he described as a pre-planned attempt to get rid of him, saying the lesson he learnt from the attack was that there was no security but God.

“I feel highly honoured to welcome our leaders and elders on this solidarity visit. I thank you most sincerely for your support which you have shown in different ways to support our government.

“It is unfortunate that we found ourselves in such situations contrary to what we are known for as a peaceful State.

“Contrary to the insinuations that someone was killed at the spot of the protest, it is a lie. As we struggled to get out of the place, my security aides maintained the restraints and no shooting came from any of my security aides.

“So, what happened that day wasn’t a question of spontaneous attack, it was pre-planned. But the lesson I learnt was that there is no security but God. Security of God is the ultimate”, he added.

He added that “what we witnessed on Saturday was what I didn’t think could happen in our State. CACOVID is a private arrangement to support the government in the combat of COVID-19 by making provision for relief materials to cushion the adverse effects of the pandemic.

“It is mandatory that they must complete the delivery and then flag off. The State does not have the prerogative to decide on the distribution.

“And moreover, the most important component of what they wanted to give to the people of the State was not yet delivered — the rice component.

“Moreso, the food items were not procured with State fund. So, it wasn’t the deliberate efforts of anyone to not distribute the palliatives”, he clarified.