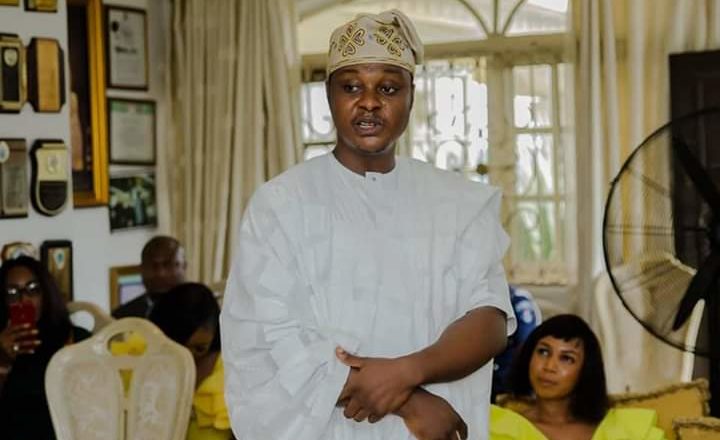 The young dynamic philanthropist,Aare Jide Taiwo has added another feather to his cap,as he becomes Aare Ago of Isaga Orile, a prominent town in Abeokuta North Local Government of Ogun State.

Aare Jide Taiwo who is a great grand child of Chief Agbeinuagbo Taiwo,whom during his life time was the Jaguna of Isaga Orile and one of the Isaga Warriors that was captured during Dahomey war of the Eighteenth Century.

The Kabiesi of Isaga Orile, His Royal Majesty Oba. OLADELE OLUSOJI TELLA and the Council in Chiefs has chosen one of their own sons, Jide Taiwo as the new Aare Ago of Isaga Orile.

Aare Taiwo, a successful businessman and philanthropist is the MD/CEO of Ocean and Cargo Limited and also the Executive Director of Senior Citizens Care Foundation a Nonprofit Organisation Founded sixteen years ago for the care of the Elderly in Nigeria.
Prince Bola Ajibola SAN, CFR is currently the Chairman of Board of Directors of the Organisation.
Aare Jide Taiwo was also recently honored with another Chieftancy title from His Imperial Majesty Oba Adedotun Gbadebo Alake of Egbaland.

“Isaga okumase ,Omo ahere owo”,as they are popularly called,Are Taiwo great grand father Chief Agbeinuagbo Taiwo was a successful Merchant who After the war settled down permanently at Ibara, Abeokuta.He was not just a brave and powerful personality whose name was popular among the settlers of Ibara at that time till date, Agbeinuagbo compound stands the biggest compound at Isale Isaga in Ibara, Abeokuta.

History has it that Baba Agbeinuagbo had a son who was prominent at the time called Subaru Taiwo foundly called Baba Ibara, a successful merchant and a good friend to the then Alake of Egbaland. He was closely acquainted to Pa. Onifade a.k.a Baba Jailer who is the father to Chief Ebenezer Obey’s Wife who is from Ibara.

As a philanthropist and community leader, Subaru took care of a lot of people. He personally donated part of his land to the colonial masters when they wanted to establish the Saint Andrews Primary School,Ibara Abeokuta.

Nathaniel Taiwo was the elder brother to Chief Francis Adekunle Taiwo that was the Barinyun of Isaga Orile in the early 80’s. Nathaniel Taiwo gave birth to Engr. Kayode Ayinla Taiwo who gave Birth to Aare Jide Taiwo.

The new Are Ago is a son of the soil with strong historical and philanthropic background both in Isaga Orile and Abeokuta.