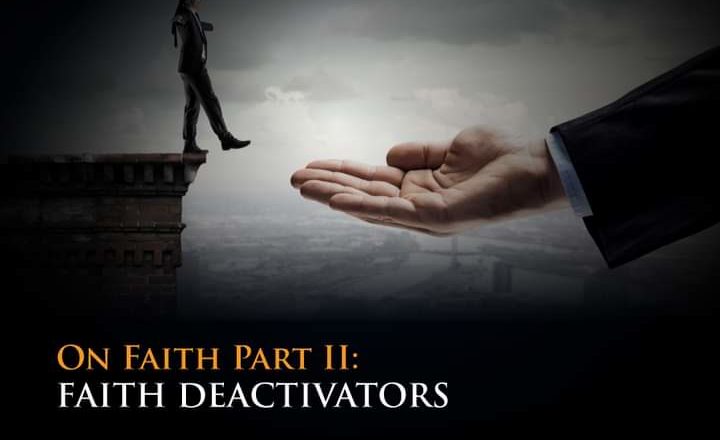 Last week we began the teaching on faith. We concluded that faith is not our problem since the scriptures tell us God has dealt to every believer “the measure of faith.” Romans 12:3. And that follows a pattern of giving. The Bible says, “Everything we could ever need for life and godliness has already been deposited in us by his divine power.” 2 Peter 1:3. God is enormously generous to us. The New Testament is all about his gifts.

But the scriptures also say there’s a power at work within us, and that that power is not dormant, it is active. God is able to do abundantly beyond all we can ask or think by the working of that power within us. Ephesians 3:20.

But if these things are so, how come we don’t get results?

Many reasons can be adduced for our poor showing. For example, if you don’t walk in love you won’t see manifestation of faith. Faith works through love. Galatians 5:6 NET. What I want to focus on are the four factors identified by Jesus during the discourse that gave rise to our subject. Jesus had cursed a fig tree, which obviously seemed a bit weird because he spoke to a tree. It’s easier for us to imagine a man talking to an animal than to imagine a man talking to a tree. The latter is deemed a sign of insanity.

When Jesus cursed the fig tree nothing apparently happened. It wasn’t until the next morning that it was discovered the tree had withered – dried up from the roots. That is a lesson in the exercise of faith. That nothing is apparently happening doesn’t mean nothing has happened. Keep standing on God’s word. God’s word will not return to him without productivity. Isaiah 55:11.

In response to the disciples’ exclamation concerning the fig tree, Jesus said, “Have faith in God.” Mark 11:22. And that right there is the first reason people don’t see manifestation of God’s power. They imagine they’re the ones who will make things happen through their exercise of faith. But it is the power of God that makes things happen. Faith is just a trigger. A remote control doesn’t cool a room. It only triggers the engine of the air conditioner. Stop doing mechanical engineering. Stop trying to work out how the result you want will come about. Stop trying to help God engineer results. Why not just ask God for a car instead of telling him to make your boss increase your salary so you can save to buy a car? What if God is thinking of an outright gift? God is able to do exceeding abundantly more than we can ever ask OR THINK. So, leave the thinking to God. Stop micromanaging God. He’s not your subordinate.

In Isaiah 55 we see God introduce a new currency called Grace. There’s the Dollar, there’s the Euro, there’s Pound Sterling and then Grace. All four are currencies according to Isaiah 55. In that passage we’re invited to buy stuff “without money and without cost.” All that’s required is a simple “self-surrender that accepts the blessing.” Isaiah 55:1 AMPC. God’s disposition towards you is financed by the currency of grace. Stop trying to show God how to do his work of grace.

The second reason we don’t see manifestation of faith is because of doubt. Jesus said, “I tell you the truth, if someone says to this mountain, ‘Be lifted up and thrown into the sea,’ and does not doubt in his heart but believes what he says will happen, it will be done for him.” Again, note it says, “it will be done for him.” It is God who does, not us. Faith is not willpower.

Doubt is not always, Can God do? Doubt many times is, Hath God said? When you read God’s promises in scriptures you’re supposed to appropriate them. Speaking about what he saw and heard on the mount of transfiguration, Peter wrote, “The prophetic word was confirmed to us. You will do well to keep focusing on it… The main thing to keep in mind here is that no prophecy of Scripture is a matter of private opinion.” 2 Peter 1:19-20 MSG. To make you doubt the word of God, what Satan does is make you wonder whether that word you read in the Bible was spoken to YOU. He’ll tell you it’s just a general word thrown out there and since it wasn’t spoken to you in particular you can’t claim it. He’s asking you to make scriptures private opinion. You’ll start wondering if God will heal you, after all he hasn’t said to you, “Mary, I have healed you.” It’s the exact same trick Satan used on Adam and Eve – Hath God said? Genesis 3:1. Why are you waiting for private revelation rather than appropriating the word of God? All things are yours. The law of reverse possession says everything belongs to you because you belong to Christ who belongs to God. 1 Corinthians 3:21-23. To be possessed of God is to have possession. Everything owned by God is yours.

But the worst form of doubt emanates from doubting God’s love for us. We tend to imagine God’s love is conditional, that his love is dependent on our conduct. But it’s not. His love was established when we weren’t even his children. Romans 5:8. “But Christ proved God’s passionate love for us by dying in our place while we were still lost and ungodly.” Roman 5:8 TPT. Meaning by human standard God is over-committed. Never doubt God’s love. Nothing can EVER separate you from God’s love. Romans 8:35-39. You take the word of God for what it says, you don’t know the love of God through your feelings.

The third reason we don’t see the manifestation of our faith is our inability to live ahead of time. Jesus said, “Whatever you pray and ask for, believe that you receive it and it will be yours.” You have to live in a future in which your prayer has been answered if you want your prayer answered. And from there you speak in past tense. Now, that may seem crazy but it’s not really. What the Bible is saying is, live in a virtual reality world until actual reality adjusts to become that virtual reality. Just imagine yourself in a video game set in a time say two years ahead of now. That’s faith. Our video games are so real to us. It’s why we express all those emotions – anger, excitement, frustration… It’s unreal but yet real. If it’s not real to us we won’t be expressing those emotions. Faith is virtual realism. You’ve had a good practice run with your video game, now put the knowledge to use. God takes all that faith stuff, all that “unreal” stuff seriously. As long as you believe that unreal realism is real, it’s also real to God. He will do everything in his power to make that unreal state become real. Even if he has to bend the laws of physics. Joshua once commanded the sun and the moon to stand still. His ignorance of cosmology did not deter God from honoring his faith. John 10:12-13. In the virtual reality world of Joshua’s imagination the sun can stand still.

The fourth reason we don’t see manifestation of faith is because of inability to forgive. Jesus said, “For this reason I tell you, whatever you pray and ask for, believe that you receive it and it will be yours. Whenever you stand praying, if you have anything against anyone, forgive him, so that your heavenly Father will also forgive you your sins.” Mark 11:24-25. The most important thing to note here is that the forgiveness required is unilateral. It is not dependent on the discussion of the issue with the other party; neither does it require the other party to say “I’m sorry” before you forgive. If you want answered prayer forgive everyone you have a problem with. Just let it go. If you don’t the faith in you will not activate the power of God in you. Faith is encumbered by unforgiveness.

Unforgiveness is not power, it’s actually stupidity. Jesus said to forgive if you want God to heal you of that disease and you say you’ll rather hold on to the disease. The disease will kill you. You’re holding on to death. Which is more important: being healed of a disease or successfully holding a grudge? Well, those are the four factors Jesus identified as faith inhibitors in his discourse about the fig tree.

These are the four things you should do to exercise faith:

To read On Faith Part 2: Faith Deactivators go to www.myilluminare.com/on-faith-part-2-faith-deactivators/.

*To understand the Christian walk from a contemporary perspective, read my book, Conversations of a 21st Century Saint. Order at https://lekealderstore.com.