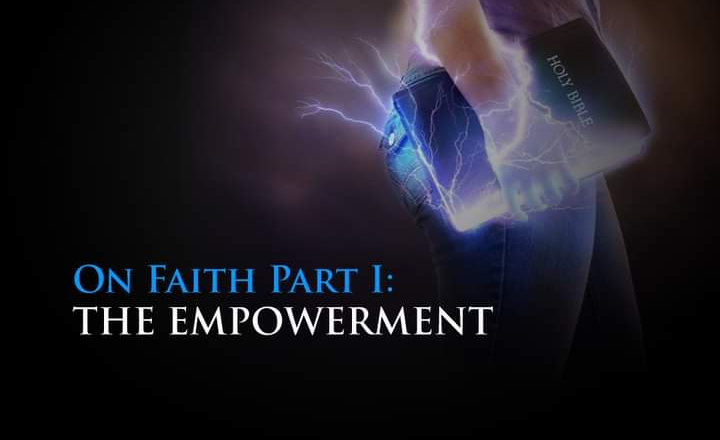 Without a doubt there are challenges in life. And they come in various shades and sizes. As you study responses to those challenges however, you soon realize some people will rather be pitied than fight the good fight of faith. They derive comfort from a feeling of helplessness. There’s that feeling of self-righteousness – “I don’t deserve all these trials. Life is unfair to me. My life is full of difficulties. Why me?” But the devil doesn’t care about fairness. There’s no moral bone in his body. Satan is sadistic. He’ll gleefully lay cancer on a baby. Any discussion of fairness where the devil is concerned is a conversation headed in the wrong direction. It’s a nonstarter.

Some resort to funny notions of spiritual warfare. They place a bible under their pillow. But how’s putting a bible under your pillow a repellent of demonic forces? You might as well put Chinua Achebe’s Things Fall Apart under your pillow. Satan is not allergic to the Bible. He reads it. He quoted it to Jesus in Matthew 4:6. When you treat the Bible that way – placing it under your pillow for protection, it’s actually idolatry. The Bible is not a talisman. And you shouldn’t wear it as amulet. The print is just a literary medium, it is not the word of God. The word of God is spirit. Jesus said, “The words that I speak to you are spirit and life.” John 6:63. The print edition is textual presentation of information about the Son of God. The word, “Bible” is a transliteration of the Greek word biblos, meaning “book”. That bound volume is no more holy than a computer is holy, or a phone is holy just because it contains biblical text.

Some hang crosses at home, and that’s supposed to offer some sort of protection. But the cross was nothing more than a barbaric execution device employed by the Romans. It’s a symbol of shame. And it’s not intrinsic to Jesus. Two thieves were hanged with him. Jesus was treated as a criminal. Making the sign of the cross does not intimidate demons. Touching your forehead and three points on your chest won’t do you any good if you’re in danger. The sign language has no probative spiritual value.

Satan of course promotes these notions. Movies like The Exorcist tout them. That film is nothing but Satan’s propaganda. It’s fake news. You can’t cast out demons by sprinkling holy water. You command demons to leave in the name of Jesus. Not once did Jesus cast out demons with holy water. And there’s nothing like holy water in Christianity. It’s not in the Bible.

Eventually some resort to faith. So, they begin to ask God for faith. But if you’re born again that’s unscriptural. You already have faith. You got it at salvation. The proper rendition of Ephesians 2:8 is, “For by grace are you saved through faith; and this (faith is) not of yourselves: it is the gift of God.” It’s how church fathers like Jerome, Fulgentius and Augustine understood it. The neuter, “this” refers back to the feminine noun, “faith.” In fact, some the scribes of the Byzantine text interpreted that passage as, “You are saved through THE faith.” You’ll see the significance of that definite article later but suffice to say both the faith and the grace, as well as the salvation are gifts from God. It’s why the Message translation says, “It’s God’s gift from start to finish.”

God gave you faith at salvation. You have faith. And you don’t need much grammage. That thing is dynamite. When the disciples couldn’t cast out an epileptic demon, Jesus said it was because they had little faith. But then he goes on to say that if they had faith the size of a mustard seed, they could move mountains. Matthew 17:20. The mustard seed is rather tiny, but the average mountain weighs a trillion tons. It would seem therefore that the recommended size for an all-purpose, all terrain faith is the mustard seed size. Whatever the disciples had must have been grams smaller. A mustard seed sized faith will power phenomena is what Jesus was saying. It will move mountains, cast out demons, raise the dead, replace body parts. Replacement of body parts is no big deal to God. He created the axolotl. The axolotl is a walking fish. It can regenerate, repair and replace its arms and legs.

The Bible says God gave every believer a standard measure of faith – “the measure of faith.” Romans 12:3. We all got the same standard measure, no one got more, no one got less. There’s egalitarianism of dispensation of faith. Therefore, faith is not our problem. We have faith. When the devil tells you, you don’t have faith to be healed, or that your faith is too little to fetch you your miracle, know that he’s lying. You have the measure of faith. “Everything we could ever need for life and godliness has already been deposited in us by his divine power.” 2 Peter 1:3.

In Luke 17 the disciples asked Jesus to increase their faith. Jesus looked around, saw a black mulberry tree and told them, if they had faith the size of mustard seed they could say to the black mulberry tree, be pulled up by the roots and be transported to the sea, and it will obey them. Luke 17:5-6. The black mulberry tree has an extensive root system. Uprooting it won’t be easy, but faith can. Analogically cancerous roots can also be uprooted by faith. The Son of God was made manifest to undo and to loosen the works the devil has done. 1 John 3:8 AMPC

But here’s the New Testament difference. Unlike the disciples we can’t ask God to increase our faith. We already possess the standard measure. When the disciples made their request, Jesus hadn’t gone to the cross. It was after his resurrection that he started gifting men with faith. It’s part of the salvation package. Note that after the disciples got born again no miracle was beyond them. Peter and John healed a cripple, Phillip teleported, Peter raised the dead. Even latecomer Paul raised the dead. He was given the measure of faith at salvation. Nothing should be beyond us.

When Jesus cursed the fig tree and it withered from the roots the disciples were amazed. Mark 11:12-25. It was the first time they were witnessing such phenomenon – a man commanding nature. They had not figured Jesus out by this time. And so, when he rebuked the sea they referenced that fig tree incident – “What manner of man is this? EVEN the winds and the waves obey him!” In other words, a tree obeyed him the other day and now the winds and the sea obey him too. In response to their amazement Jesus said, “Let the faith of God be in you!” Mark 11:22. At the time Jesus said this he hadn’t gone to the cross. The New Testament hadn’t been inaugurated. It would be inaugurated in his blood. 1 Corinthians 11:25. After the inauguration of the New Testament Jesus solved the missing faith problem by gifting men with faith. Now the faith of God is in us.

The Bible says there’s a mighty power working within us as well. That power is “immeasurable and unlimited.” It’s the power that raised Jesus from the dead. Ephesians 1:20. It is not dormant. It is active. Think of a volcano simmering under the surface. Or if you’re a fan of space technology (like I am) think of a Spacex Falcon 9 rocket smoldering on the launch pad, ready for lift off. What faith does is ignite the power to create conflagration. The conflagration is what produces our miracle. Ephesians 3:20.

The question therefore arises, why don’t we see the manifestation of God’s power as we should. Well, part of the problem is, we don’t realize we have the faith of Christ.

Are there other reasons why our faith don’t work? Jesus identified four. We’ll look at them next week.