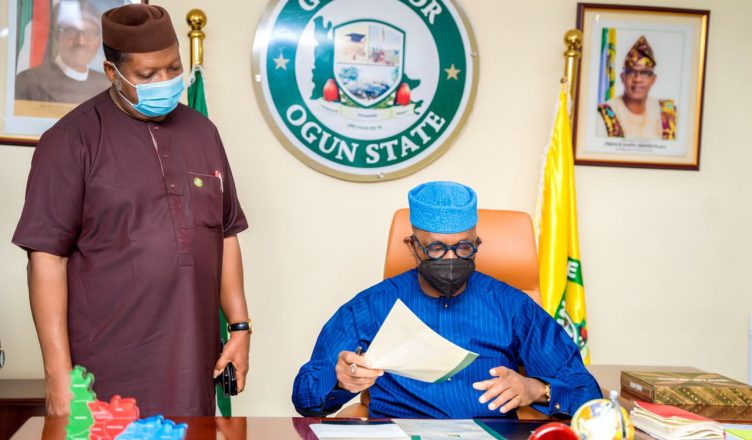 Prince Abiodun, who assented to the bill during a Security Council meeting at the State Secretariat at Oke Mosan, Abeokuta, called on the security agencies to swing immediately into action and enforce provisions of the law.

He said that this is a subject matter that has been discussed along the length and breadth of the country and which “we southern governors have discussed and endorsed”.

Cattle rearers, according to Abiodun have a six- month period of grace before it becomes illegal in Ogun state for cattle rearers to occupy unapproved public areas and private land with their livestock for grazing.

The law also prohibits the act of moving cattle around public places by herders.

A committee headed by the State Commissioner for Agriculture, Dr. Adeola Odedina has been set up to midwife the implementation and enforcement of the new law.

The signing of the anti-open grazing law by the Governor followed the decision of the Southern Governors’ Forum last August, setting the September deadline to pass the law across Member States.

There were pockets of crises witnessed in the State as a result of alleged open grazing in the Yewa axis of the State in April, necessitating the setting up of a peace committee headed by a former House of Representatives, Hon. Kayode Oladele.

The crises this year pitched Hausa-Fulani settlers against their Yoruba host communities.

It is expected that the anti-open grazing law will prevent the spread of the menace across the State.

Gov. Abiodun said, “By implication, in six months, it will become unlawful to openly graze cattle or other livestock in the state”

The Ogun State House of Assembly had on July 8, 2021, passed the bill.

The bill was passed after unanimous votes by the lawmakers at the sitting where the bill was read the third time.