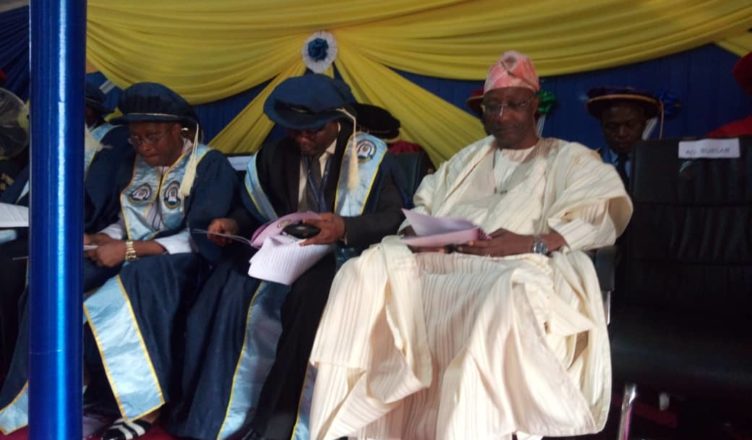 The Chairman of the Polytechnic Ilaro Community Forum ( PICOF), Chief Safarudeen Popoola has condemned in totality the statement of the suspended president of the students Union of the Federal Polytechnic, Ilaro on the alleged rent increment by landlords association in the town.
Chief Popoola explained that in a meeting held on January 30, 2020 between PICOF, SUG and rector, the president alleged that some landlords have increased the house rents which the meeting later found out to be untrue.

He stated further that, it was barely a month after the inauguration of the new Students Union body that the meeting took place and from all the evidences presented, there was no increase in the payment of house rents within the community.

The chairman however warned against any act that is capable of bringing civil unrest to the community on the part of the suspended president as well as the reputation of the Polytechnic rector who he described as ” Students Advocate” and a bridge between the community and the Polytechnic.

In the same vein, the area community development association vice chairman, Ilaro, Pastor Aretola has described the statement of Comrade Adegboye Emmanuel Olatunji on a radio programme directed at the rector as “nothing but false, aimed at achieving cheap publicity”.

According to him, the issue of house rent was discussed and we even invited one of the elders of the community, Chief Egbeolu who brought a documentary evidence to refute the claim of Comrade Adegboye Olatunji on the issue.

“If he wants a cheap publicity, why is he not speaking the truth? Why is he attacking the personality of the rector for all what the man has done for the students?” He asked.

It would be recalled that Comrade Adegboye Emmanuel Olatunji on Thursday attacked the personality of the Polytechnic rector, Arc Olusegun Aluko while featuring on a live programme on Sweet FM 107:1 in Abeokuta.

He alleged that he was being persecuted for not allowing landlords in conjunction with the rector to increase the payment of house rents among the students living off campus in Ilaro.

PICOF therefore urged members of the public to discountenance the statement which is only meant to bring into total disrepute not only the image of the rector, but that of PICOF and the good people of Ilaro at large.

Chief Popoola also warned against any act that may re-awaken the sleeping dog as the community is yet to recover from the loss of July, 1997 when the issue of indigenes and students nearly turned Ilaro to a an empty town.

While declaring their support for the rector and the management team, PICOF implored the rector to continue his good work with a promise to sustain the good and cordial relationship between the two parties.

PICOF is a conglomerate of CDAs, CDC, transport operators, security agencies, religious leaders,polytechnic community, traditional rulers, market women, local government authority among others who ensure peaceful co-existence relationship among the students of the Federal Polytechnic, Ilaro, the community as well as the stakeholders.