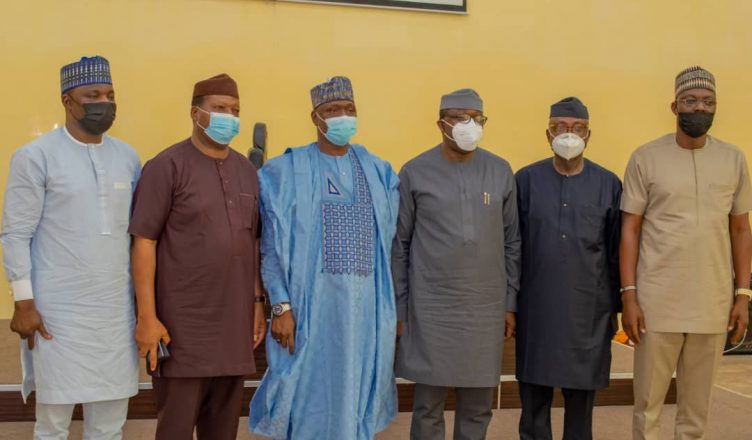 In its bid to find a way out of the ongoing indefinite strike embarked upon by the Parliamentary Staff Association of Nigeria (PASAN) and those of judicial workers over non-implementation of financial autonomy to State legislatures and judiciary, the Chairman of Conference of Speakers of State Legislatures in Nigeria, Rt. Hon. Abubakar Suleiman led other leaders of the Conference to a meeting with the Chairman of the Nigeria Governors’ Forum Dr. Fayemi Kayode, in Ado-Ekiti on how to resolve the issues leading to the Strike.

Speaking after the meeting, the Chairman of the Speakers Conference said that the meeting was part of the efforts to resolve the issue of financial autonomy to State legislatures and the judiciary which led to the indefinite strike by the workers of the two arms of Government.

He noted that the Conference of Speakers had met with Governor Fayemi being the Chairman of Nigeria Governors’ Forum so as to come up with measures to end the strike and get the striking workers back to work.

Rt. Hon. Suleiman assured that further engagements would continue in Abuja this week to finally resolve the matter.

He also explained that the meeting also discussed on measures to further strengthen Executive – Legislative collaboration and mutual cooperation for the betterment of Nigerians through annual or biannual executive-legislative parley with a view to promoting mutual interdependence of the two arms of government.

Speaking shortly after the meeting, the Vice Chairman of the Conference (South West) and the Speaker of the Ogun State House of Assembly, Rt. Hon. Olakunle Oluomo stated that the National leadership of Conference of Speakers had begun the process of ensuring the industrial action embarked upon by Staff of the Legislature is abated through the engagement of the Conference with the Chairman of the Nigeria Governors’ Forum.

According to him, the meeting held with Governor Kayode Fayemi of Ekiti State in his capacity as the Chairman Governors forum with further engagements scheduled to hold in Abuja later this week, would help resolve the issue of Legislature and Judiciary Autonomy for the arms of government.

It would be recalled that the issue of financial autonomy for the State Legislatures and judiciary had led to the current strike embarked upon by the workers of the two arms of government with a view to calling on the Federal Government to ensure their autonomy.