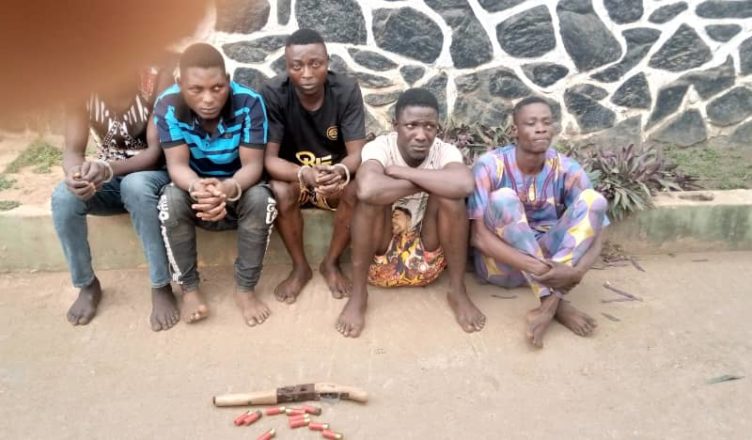 Five armed robbery suspects were on Monday 24th August 2020 arrested by operatives of Ogun State Police Command while robbing a motorcyclist of his motorcycle at Ota area of the state.
The suspects; Yusuf Ogundimu 23, a.k.a agbara, Moses Anthony 23 a.k.a Opa, Moruf Olafimihan 24, Toheeb Shola 22 and Adeyemi Afeez 27 were arrested following an information received by the police at Sango division that the syndicate who specialized in snatching motorcycle within Ijoko, Sango, ifo and Agbado area were operating at Odo Alamo area of Ijoko Ota. Upon the information, the DPO Sango division CSP Godwin Idehai quickly led his anti robbery team to the scene, on sighting the policemen, the suspects realized that the game is over took to their heels but were hotly chased consequent upon which five of them were apprehended.
Investigation revealed that the gang who are eight in number were all residents of Onipetesi area of Ijoko.
Iteams recovered from them are one locally made cut to size gun, ten live cartridges and one Bajaj motorcycle with registration number EDO 23 QL
Meanwhile, the commissioner of police CP Edward A Ajogun has ordered the immediate transfer of the suspects to special anti robbery squads (SARS) for discreet investigation. The CP also ordered that the remaining members of the gang be hunted for and brought to Justice .
The CP therefore appealed to members of the public to always cooperate with the police so as to rid the state of criminal elements.