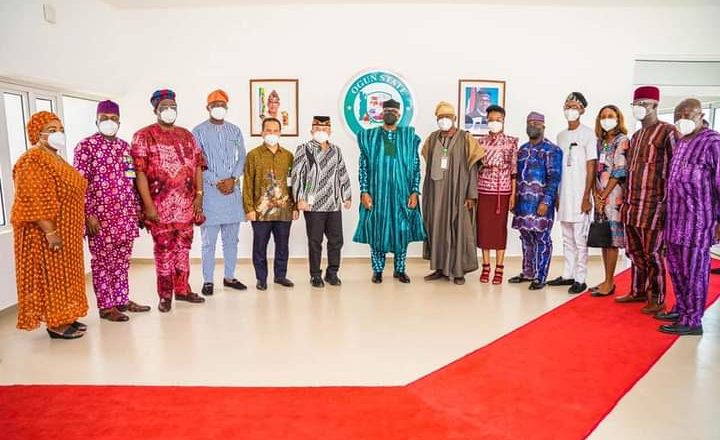 Ogun State Government will set up economic team to liaise with the Indonesian investors in exploring areas of interests that will be mutually beneficial to both the state and the Pacific nation.

The state governor,Prince Dapo Abiodun, gave this hint when he hosted the Indonesian Ambassador to Nigeria, Dr. Usra Hendra Harahap, in his office at Oke-Mosan, Abeokuta.

Prince Abiodun noted that Indonesia has made tremendous progress in the areas of technology, infrastructure, housing, transportation and medicine, expressing the state’s interest to tap in.

The governor said, “Ogun has more than enough land to accommodate a lot of industries. We are desirous of building a seaport because the deepest part of water in the country is in our state.

“We will be willing to collaborate with Indonesia to develop seaport, airport, housing, and other sectors. We look forward to seeing how the state and Indonesia can work together to actualise all these”.

He informed the Indonesian delegation that Ogun has more than 12, 000 square kilometres of arable land situable for the cultivation of food and cash crops, adding that the state has the highest palm oil plantations which the Indonesian investors could leverage on.

On Transportation, Abiodun pointed out that his administration was adopting a multi-dimensional transportation system that would help in fast-tracking the economy of the state, expressing the hope that Indonesia, with her feat in the sector, would work with the state to achieve its transportation objectives.

While assuring conducive environment for investments, the governor enthused that the Indonesian Ambassador would prefer Ogun, as the state put in place what investors needed in terms of ease of doing business and availability of adequate manpower.

Abiodun, however, said that the state working towards providing adequate electricity in all its industrial clusters, inviting Indonesian companies and investors from other parts of the world to come and explore potentials that exist in the state.

Speaking earlier, Ambassador Harahap, said his country has made significant inroad in the areas of technology, infrastructure, agriculture, medicine among others, saying his country has a lot of interesting information on the state and was ready to do business with Ogun.

According to him, the desire of the state government to bequeath a modern transportation system that would herald more development was well known to his country, adding that his home country was ready to invest in modern railway and would collaborate with the state in developing its cargo airport.

The Ambassador further disclosed that Indonesian companies have built landmark infrastructure in many parts of the world ranging from bridges, heavy machines, blue chip equipment, solar systems, among others, noting “Indonesian investors are interested in joint ventures with their Nigerian counterparts in agriculture and housing development”.