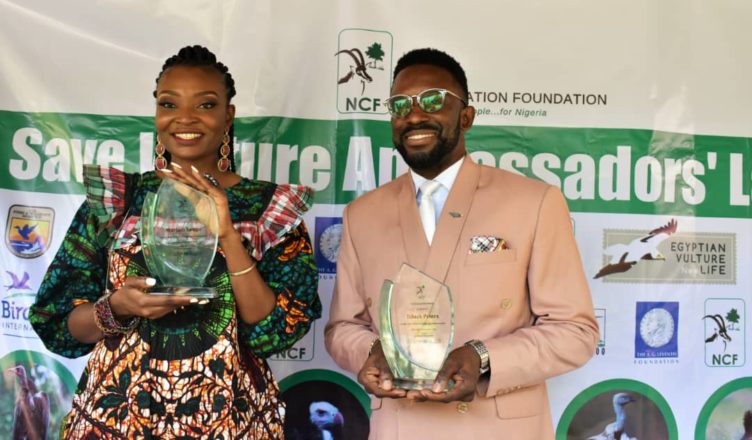 Actor and comedian, Kunle Idowu (popularly known as Frank Donga), health coach and co-host of popular morning show on TVC, Mariam Longe and musician, Tito Da Fire were unveiled as ambassadors for the Nigerian Conservation Foundation Save the Vulture Campaign.

Dr. Muhtari Aminu-Kano, Director General of NCF in his welcome address, acknowledged the Ambassadors for the willingness and enthusiasm shown in partnering with the Foundation. He revealed that humans are fighting nature and nature is fighting back.

He went further to debunk myths surrounding the vultures and urged all to come together to save the remaining vulture species from going into extinction.

Dr. Joseph Onoja, Director Technical Program, in his presentation showed that six out of eleven vulture species in Africa are on the brink of extinction.

He said, “Market surveys revealed that the major cause of vulture decline in Nigeria is use for traditional medicine. Other causes are poisoning, extraction of eggs from nests; habitat degradation from indiscriminate logging which reduces nest sites for vultures; poor perception of vultures as harbinger of ill will leading to direct persecution by locals”.
Dr Onoja further explained that the Save the Vulture Project has pioneered efforts in tackling illegal wildlife trade in Nigeria. However, a more holistic intervention that will address knowledge gap among the public on the socio-economic and ecological role of vulture in the society is needed. Hence, the unveiling of the ambassadors to help propagate the message and deepen the conversation.
Save Vulture Project is funded by European Union and; United States Fish and Wildlife Service.

The event took place on Thursday, 3rd December, 2020 at the Lekki Conservation Centre and was attended by 30 participants in strict compliance with Covid-19 protocols while others joined through virtual platforms.