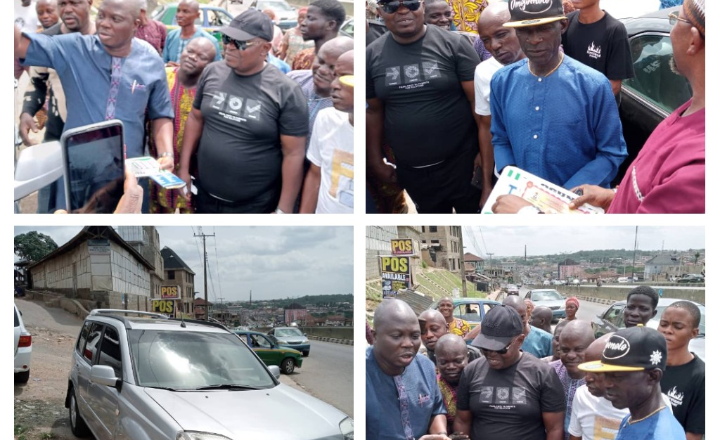 The promise made recently by Fuji music star, Alhaji (Dr) Sefiu Alao Adekunle, Baba Oko, to buy a car for a fellow Fuji artiste, Musiliu Emesi, has finally been fulfilled.

The vehicle which is actually, a Nissan X-Trail SUV, was presented to visibly joyous Musiliu Emesi on Sunday, 2nd May, 2021, at Sefiu Alao’s Corporate Office in AgoOba, Abeokuta.

The well respected Fuji artist, Sefiu Alao intentionally refrained from being at the scene of the presentation, but he, was represented by his friend, Yoruba movie star, Otunba Bolaji Amusan popularly known as Mr. Latin and his big brother, Alhaji Samsondeen Adekunle, who made the presentation on his behalf.

And before going down stairs from Sefiu Alao’s towering office, Mr. Latin took his time to appreciate God for Musiliu Emesi for being fortunate enough to know Sefiu Alao, who he described as a free giver.

Mr. Latin asserted that, for all the years he had known, and had been close to Sefiu Alao, he had always given out without looking back. So, the car gift to Musiliu Emesi from Sefiu Alao was not a surprise to him.

Mr. Latin thereafter urged Musiliu Emesi to be closer to his God, because God who used Sefiu Alao for him to be a car owner could use some other people, to do other things that would further turn his life around for the better. And the star actor then asked Sefiu Alao’s big brother, Alhaji Samsondeen to say something about what was happening on the day, and Olori Ebi as Sefiu Alao’s big brother is also called, advised Musiliu Emesi to try and turn a new leave.

Olori Ebi urged Musiliu Emesi to start doing anything he knew he was doing in excess in moderacy, hence forth. Because he is no longer as young as he used to be. He was also advised to he chart a better future for his own children, through what he does at present.

He reminded him that, Sefiu Alao wanted to give him money to do any good business, but since he insisted he wanted a car, that was why everyone prevailed on Sefiu Alao to give him exactly what he wanted.

Thereafter, everyone went down stairs from the first floor of the office for the vehicle presentation. Mr. Latin first handed over the number plates of the SUV to Olori Ebi for onward presentation to Musiliu Emesi, and followed that up with the papers of the grey colour SUV, and finally its key. Sefiu Alao’s big brother presented everything to Musiliu Emesi, after which he asked his Islamic Cleric friend he invited over, to pray for Musiliu Emesi against any form of accident when ever he is driving his car.

It would be recalled that, Musiliu Emesi met Sefiu Alao on stage at the burial party of legendary drummer, Baba Adewole Onilu, in early April, in Abeokuta, and requested that he should buy him a car when he, Musiliu Emesi, was given the microphone to sing too as a fellow Fuji artiste. And Sefiu Alao told him he should collect money instead to do any business of his choice, but Musiliu Emesi insisted he wanted a car, the request which Sefiu Alao later granted.