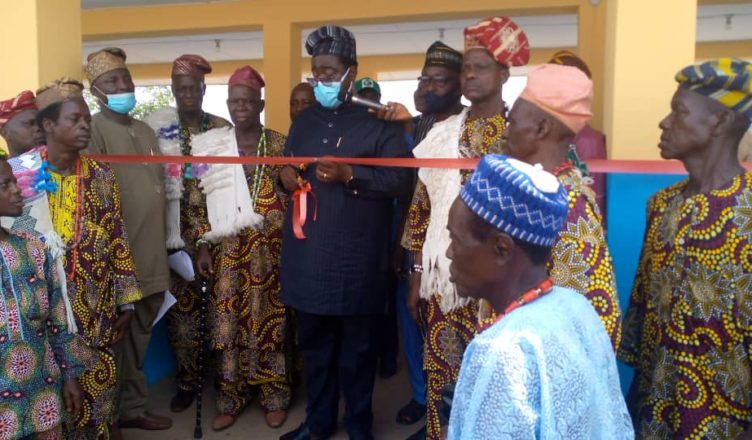 In his desire to ensure infrastrural development at the grassroots, Ogun State Governor, Prince Dapo Abiodun has commissioned two blocks of open stalls, lock-up stores and a solar powered borehole at Olugbo Market in Odeda Local Government Area of the state.

The facilities built by the State Government in collaboration with the Federal Government and International Fund for Agricultural Development ( IFAD) was aimed at boosting the livelihood of small holder farmers and marketers of farm produce at the Local Government.

Commissioning the facilities on behalf of the State Governor, Commissioner for Agriculture, Dr Adeola Odedina said the present administration was poised at helping small holder farmers and those in agric value-chain businesses provide more food and in-turn realise maximum profit.

Odedina noted that, markets with modern facilities were necessary for farmers to keep their produce.

He enumerated other laudable projects completed by the present administration through the Federal Government and IFAD as well as aids to include boreholes, road constructions, input distribution and linkage with off-takers.

The State Project Coordinator, IFAD, Mr Samuel Adeogun, implored the farmers to ensure cleanliness of the the facilities as well as the sorroundings and the hygiene of the goods, saying their goods can now be kept secure in the lock-up stores.

He charged the traders to maintain the facilities as it would boost their sales and increase their profits.

Adeogun appreciated the State Governor for releasing counterpart funds which he noted had spurred IFAD and Federal Government to assist farmers in eight Local Government of the State.

He expressed optimism that the infrastructures being commissioned would improve the productivity of farmers, encourage them to leverage on government’s aids to improve food production in the State.

They pleaded for more of government’s assistance like procurement of tractor for ploughing, motorable roads to farm and markets among others.