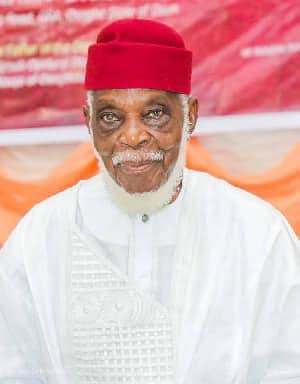 Governor Abiodun, in a statement signed by his Chief Press Secretary, Mr. Kunle Somorin, said Pa Fasanmi was one of the great icons who made indelible contributions to lawmaking as a Senator and later member House of Representatives in the Second Republic.

“He was a respected professional Pharmacist who served as National President of the Pharmaceutical Society of Nigeria in 1977 before he was elected into the Senate in 1979, after which he became a member of the House of Representatives in 1983 and also as a member of National Constitutional Conference Commission in 1994.

“His contributions to national development threw him up as not only a leader of Afenifere, the pan Yoruba socio-cultural organization but as a national hero. This is a very sad loss, indeed, but we cannot question God for calling him at this time.

“Papa heroic marks are everywhere he was privileged to serve. He was a father in the true sense of the word. We cannot write the story of political development of the South West without dedicating a chapter to him and without recourse to the roles that he played. We appreciate the role that he played in building consensus around major issues concerning the region where his name will always come up for mention as a unifying and stabilizing factor.”

Governor Abiodun, while commiserating with the family of the late elder statesman, urged them to uphold the ideals he stood for, saying that the nation will continue to draw inspiration from his life and times.

“His demise, just like that of our heroes past, must never be in vain. There can be no better time to unite together to achieve a better and more prosperous Nigeria. That will be the best tribute to pay to his glowing memory” he said.

He said Baba Fasanmi paid his dues and has left his footprints on the sands of time. “He was a professional to the core and a servant leader in its truest meaning. Nigeria will miss his voice of wisdom on critical matters concerning her development. He was an epitome of altruism, justice and courage and he sided with the masses at all times.”He pointed.

“On behalf of the government and people of Ogun State, I want to express our heartfelt condolence to the family of Pa Fasanmi on this great and irreparable loss. He was a pride to our country, our region and we will surely miss him,” Governor Abiodun said.