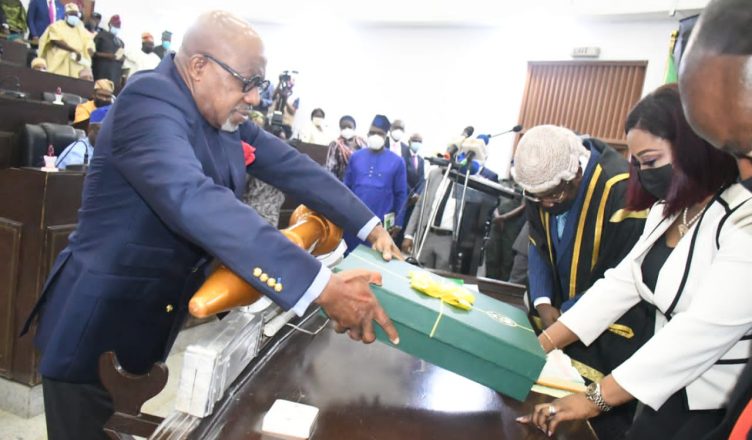 Ogun State Governor, Prince Dapo Abiodun has presented a total budget proposal of N350.74bn as the 2022 Appropriation Bill to the State House of Assembly, out of which a sum of N170bn is projected for physical capital projects representing an increase of N10bn from the current 2021 budget.
Giving a breakdown of the appropriation bill christened: ‘Budget of Restoration’, Abiodun noted that the sum of N170bn would cater for capital expenditure, while personnel cost would take N75bn, with N51bn earmarked for overhead expenses, just as N28bn was set aside for debt service obligations to attract capital investment into the State economy.
Positing that the physical capital projects were meant to chart an economic recovery growth through investment in physical projects that would create enabling environment forq investment, create employment and trigger redistribution of resources, the Governor said that N7.7bn would be set aside for stabilization fund to insulate and position the State towards unprecedented activities or economic shocks.

Speaking on the budget sourcing, the State helmsman stated that the total State funding was estimated at N350.74bn including N56.30bn expected to be sourced through internally generated revenue, while the revenue targets of other Ministries, Departments and Agencies (MDAs) was put at N96.87bn totaling N153.17bn. He added that N73.01bn was being expected from the Federation Account, while the sum of N124.56bn would be sourced from capital receipts.
Reeling out the highlights of the 2022 capital projects in line with the ISEYA pillars of the present administration, Abiodun submitted that Infrastructure would gulp N82bn, with N86bn expected to be spent on Social Welfare and Well Being, just as N56b was being voted for Education, just as Youth Empowerment would get N6bn.

He added that N15bn would go for Agriculture, while Enablers which consisted of General Public Service, Public Order and Safety, Stabilization Fund, Judiciary, Legislature, Pension and Gratuity would have N106bn.
Giving a sectorial breakdown of the estimate, the Governor said that N56.07bn was being allocated for education sector, representing 16%, while N35.07bn would cater for the health sector, with the Housing and community development sector sharing N28.65bn,  just as N15.21bn was voted for Agriculture and industry.
According to him, infrastructure would gulp N77.77bn representing 22% of the total budget, with Recreation, Culture and Religion to share N6.32bn, just as N22.097bn would be spent on social protection.

He further assured that the 2022 Budget would contain only implementable and critical projects, which when completed, would significantly address current structural challenges in the State economy, improve the business environment and accelerate economic recovery.
”In 2022, we will continue to accord priority attention to the completion of existing projects; projects with revenue potential; projects consistent with priorities articulated in the State Economic Development Strategy and projects that can enhance employment generation”, the Governor stated
Earlier in his opening remarks, the Assembly Speaker, Rt. Hon. Olakunle Oluomo, lauded the various infrastructural projects put in place by the Governor across the three senatorial districts, with an assurance of continuous mutual interdependence between the legislature and other arms of government towards achieving more monumental development in all facets of the State economy.

He noted that a speedy and thorough legislative process would be conducted on the proposed budget with a view to sustaining the tradition of its passage on record time to comply with the January to December cycle in line with international financial standard.
The Speaker on behalf of his colleague-lawmakers sought for the release of their annual constituency project intervention fund to enable the lawmakers implement their respective constituency projects with a view to complementing the developmental projects put in place in all constituencies to further restore the honour and dignity of the lawmakers.
He equally sought for the release of the severance allowance of members who served in the Rt. Hon. Suraju Adekunbi-led Eighth Legislature, adding that such would enable them cater for expenses being integral members of the present administration in the State.
The budget presentation was attended by the State Deputy Governor, Engr. Noimot Salako-Oyedele, her former colleagues, Salimat Badru, Shefiu Kaka, former Speakers Titi Oseni-Gomez, Tunji Egbetokun, Suraju Adekunbi, State Head of Service, Dr. Nafiu Aigoro, former military administrators in the State, members of the State Executive Council, traditional rulers including the Paramount Ruler of Egbaland, Oba Aremu Gbadebo, his Remo and Yewa counterparts, Oba Babatunde Ajayi and Oba Kehinde Olugbenle respectively as well as the body of Permanent Secretaries and party stalwarts amongst others.