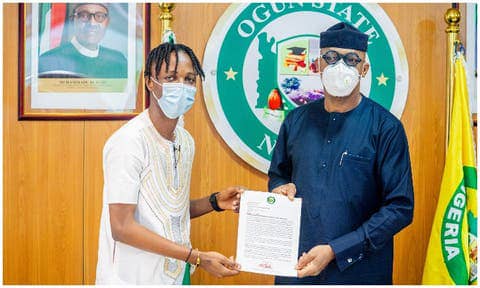 The Governor of Ogun state, Prince Dapo Abiodun Mfr,have been condermed for appointing the BB Naija star,Laycon as Youth Ambassador and giving him #5m with a 3bedroom flat.

The governor welcomed Laycon to his office along side the special assistance to the governor on youth and sport,Comrade Lamide Lawal.

Laycon who had earlier smiled to the bank with #85m,was given a royal welcome to the state by youth and his fan.The accolade was sponsored by youth in the cabinet of the governor.

Mr Adebayo Ajayi,an IT expect said he was disappointed with the jesture.He said,”it’s a misplaced priority that shouldn’t come from Government.The public expectation is rediculed through such act.Its the least I expect from a state like Ogun badly affected by Covid-19.”

Paul ADESHINA,a sport analyst said the government are laying wrong foundation for the youth.He said,”To be surrounded by youth doesn’t mean you shouldn’t know where to draw the line between what is right and what is not right as far as youths are concerned. The question is, what values are they trying to communicate to the youths by bringing Laycon to them after winning money without doing anything beyond lounging in one house for some weeks?”

The criticism on the social media laid more emphasis on the moral lesson from the stardom of Laycon as a role model to this generation.

A Twitter handler,BigHarty, said 5m to a wildly condermed winner of BB Naija both locally and internationally,in addition to #85m is insensitive.

He said Public display of such misplaced priority gives the people the impression not to trust government with public funds.

Lola Ogunsanwo,an undergraduate of polytechnic said the government just announced that there is no dignity in labour.

She said,”When a young man just became so rich in a shot time with an act that is elien to our culture,it means we have gotten it wrong.Most of our parents with legitimate work for many years can’t boost of half of that money.Sadly, we celebrated our teachers yesterday,we didn’t give them such an honor and reward.It is so sad.”