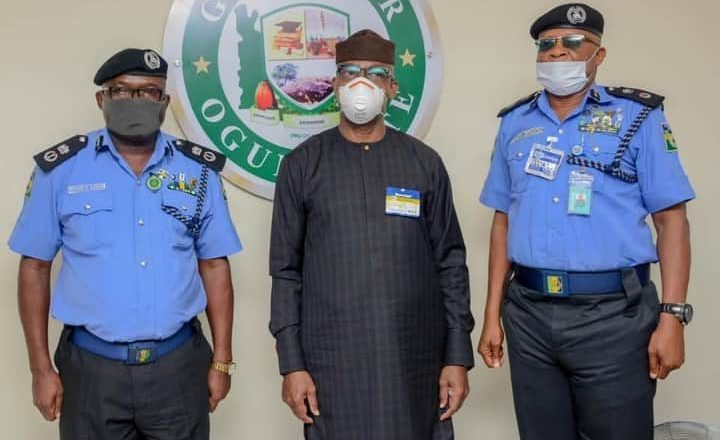 Ogun State Governor, Prince Dapo Abiodun applauded the retiring Police Commissioner, Kenneth Ebrimson for his efforts at stemming tide of crimes and criminality in the state.

The Governor who stated this while receiving the new Commissioner of Police, Mr Edward Awolowo Ajogun led by his (Ajogun) predecessor at his office at Oke Mosan, Abeokuta said under the leadership of the retired police Commissioner, the state was able to curtail cultism, kidnapping and armed robbery.

Gov Abiodun commended the retired Police Commissioner and other security chiefs in the state for rising to the occasion.

“You have conducted and led the Ogun State Police Command very well and creditably so; you have under your leadership ensured that you stemmed crime and criminality in the state. We have seen a significant decrease in cultism, kidnapping and armed robbery,” Gov Abiodun noted.

In his remarks, Ebrimson, who said he is leaving the State and security service with fond memories thanked the administration of Prince Dapo Abidoun for the support given to him towards ensuring that the state under his watch became a tough ground for criminals.

Ebrimson said his successor was a competent officer whose experience and temperament would sustain the tempo of security in the state. He commended the state government for ensuring that the state police command has the best in terms of logistics, saying “it is on record that the Prince Dapo Abidoun administration was able to improve the communication system, provide over 60 patrol vehicles, 366 walkie talkies, power bike motorcycles and steel helmets for the use of the police.”

“There is no iota of doubt that he is going to sustain the very tempo and security architecture we have put in place. I want to use this medium to thank you immensely because the time I assumed duty, we had serious security challenges, particularly in the area of logistics and you gave us the tools” he told the governor.

The new Police Commissioner, Edward Awolowo Ajogun, in his response, pledged that the police command under him would not give room for indiscipline, assuring that he would lead the fight against crimes and criminality to the den of criminals.