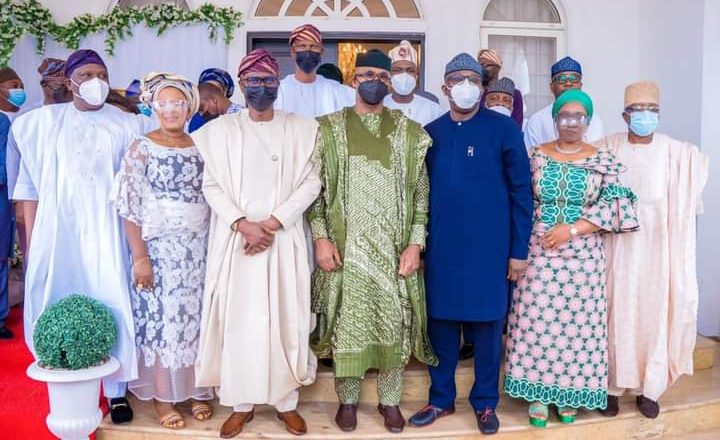 The Chairman, Nigeria Governors’ Forum and Governor of Ekiti State, Dr. Kayode Fayemi, his Lagos State counterpart, Babajide Sanwo-Olu and the former governor of Bauchi State, Adamu Mua’zu, have described the late father of the Ogun State governor, Dapo Abiodun, as a man who lived an excellent and a sacrificial life.

They also submitted that Pa Emmanuel Abiodun used the teaching profession to produce champions for the country.

The trio gave this position in their separate remarks when they paid condolence visits to Governor Abiodun on the demise of his father at the Iperu-Remo Family House of the governor, on Sunday.

Governor Fayemi noted that Pa Emmanuel Abiodun played important part in the education development in the Western Region and Ekiti State in particular, as a teacher at the Christ School, Ado-Ekiti, describing the deceased as a thorough bred teaching professional who tutored people to become champions in their chosen fields of endeavours.

“When we look back to what Baba achieved in his life time, we can not be sad, no reason to be sad. We are thankful to God that he lived well, served well and fought good fights, won many battles and he did his own on mother earth before transiting to God’s bossom, and for that, we have every reason to celebrate him.

“He taught many people who have become champions in their chosen fields. We thank God for the life of excellence, service and sacrifice”, Fayemi stated.

He said though nobody, no matter how old, would cherish the departure of a loved, the fact that Pa Abiodun left a legacy called for celebration.

He urged the people to reflect on their lives on what would be said of them after their departure.

Also speaking, Governor Sanwo-Olu noted that Pa Abiodun was a role model, a disciplinarian, who used his teaching profession to impact positively on the lives of so many people.

He said that though he was no more, it was imperative for those he left behind to appreciate God for what He used the deceased to achieve, declaring “Pa Abiodun lived a good life and his memories will linger for a long time”.

On his part, former Governor of Bauchi State, Adamu Mua’zu, described Pa Abiodun as a man who did his best for the people, his environment and beyond.

He added that he was a father of all and a good teacher to those who had the privilege of being his students.

“I am not here to share the sadness or mourn about the death of Baba. I am her to celebrate his death because his life is worthy of emulation. He lived his life to the fullest and part of what he had done is to raise this young and dynamic man God has chosen to be the governor despite all the obstacles”, Mua’zu said.

While urging the governor and his family to be happy because his father lived an impactful life, the former charged Abiodun to work harder has he was chosen by God to work for the people.

“I have not x-rayed the work of Governor Abiodun, but I have told him that he is God sent. He must work for people and for God, and I am sure he is doing exactly that. I have no doubt that he is working for the people.

“His Godfather has been God and God did it. I am sure he is going to work even much harder than he has done,” the former governor said.

Responding on behalf of the family, Governor Abiodun said his father was a great teacher who used the teaching profession to reshape the society by producing eminent personalities who are making positive impact in the country.

He expressed his gratitude to God for granting him the grace to survive his father, whom he noted was a humble and dedicated family man who contributed his modest quota to the development of not only his immediate family, but his community.

The governor further urged Nigerians, irrespective of their positions or wealth, to always endeavour to reflect on their lives and see what they can do to assist fellow human beings, submitting “living a life that does not impact on others positively is fruitless”.