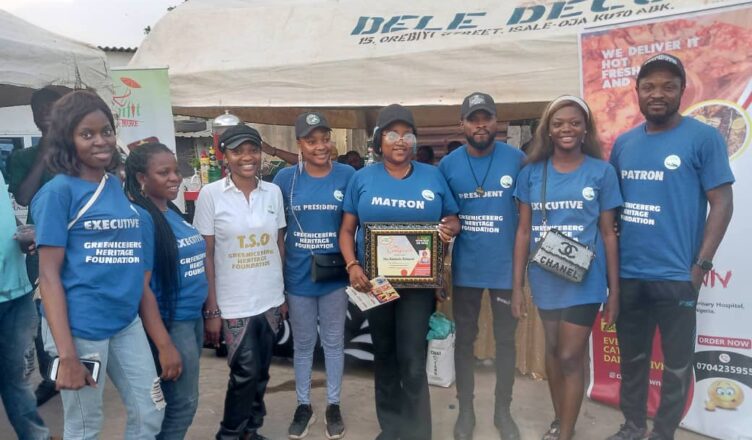 On November 27, 2022, the Greeniceberg Heritage Foundation, a humanitarian group known for their putting smile on the faces of the people, visited Ibooro community in Yewa North LGA of Ogun State.

The foundation is well known for their passion and love for humanity, especially the abandoned and people in local communities.The Passion to help the underprivileged, aged, the adolescent girl child and the youths in rural areas.

This year which marked the forth year of reaching out by the foundation, the group trained people in the production of liquid Soap and local beverage called Zobo, along side tying  of Gele (headgear), eyelash extensions, and tie-dye.

The foundation embarked on the empowerment so as to give the people financial Independent through their own business, and a sense of belonging.

The Servants in Charge of the foundation ,Titilayo Savage O. said, “We had a section just for the kids where they were urged to behave well both within and outside the school, to prevent crime, and to avoid wrong company . They were also instructed to be focus on their education, and look up to become somebody that is responsible and successful in life.

They received workbooks, pencils, and shoes in various sizes, and some of them earned additional prizes during the question-and-answer section.”

She also added that, “There was a portion devoted to “Girl Child Talk,” in which they learned about typical girl behaviour and how to use sanitary pads. Sanitary pads were distributed to every participant after the talk show.

The young males received information on general body cleanliness as well as sexual education, which emphasized having safer sex. Condoms were also distributed after the talk show.”

The group also engaged the people on childbearing and family planning, providing adequate advice on child spacing and the use of contraceptives.

Medical team among the group performed various tests on the attendees (Urine tests, B.P., HIV), and some over-the-counter medications were given out to those who required them.

Towards the end, there was a talent hunt segment where young people with singing and dancing abilities could display their skills. The best among them received gifts.

The President of the foundation, Mr Olumide Ayuba said the gesture is their individual contribution to humanity, calling on other stakeholders to give to the society.

Representative of the community, Prince Olaleye Musbau Salako, appreciated the foundation and pray for them for more resources to do more. He also called on individuals and corporate organizations to imitate the good gesture of the foundation.

The foundation also awarded committed members for their support and dedication in putting smile on the faces of other people.

Awards were given to Olumide Ayuba, Temitayo Savage, Oluwatosin Soremi, Titilope Orelaja, and other members.The Foundation Godfather, Mr. Oladehin Olaoye, was also recognized for his work behind the scenes to make the season 4 outreach a success.