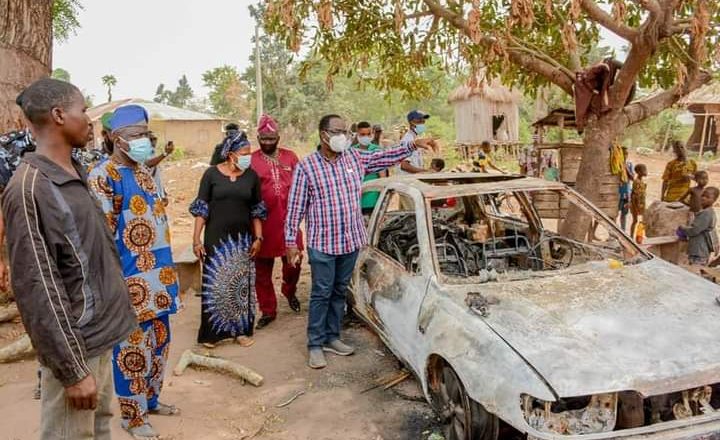 The Ogun State Government said it would not apportion blame towards any group or ethnic national in its quest to put an end to the recurrence of the herder-farmer conflicts, but find a lasting solution to the cause of the conflicts.

The Chairman, Ogun State Peace Committee on Herder-Farmer Conflicts, Hon. Kayode Oladele, who made this known during an on-the-spot assessment of the area and handing over of palliatives to the Onigua of Eggualand and the Baale of Asa, said that the committee would
be compassionate with the methods it would adopt in finding a lasting solution to the recurrence of the conflicts between herders and farmers in the State.

Oladele, while also adding that the Committee would look into how the conflict started, added that they would also calculate costs of destruction, losses and compensation to be given to victims.

“Our Committee is going to sit. We are going to be very compassionate about this. It is a fact-finding work.

“We are not going to apportion blame, but at the same time, we want to know how it started. That was why the term of reference said we have to look at the root causes. Looking at the root causes does not mean we want to apportion blame, but at least: what caused it; who attacked; who is the victim? These are the things we need to do and then: what is the level of damage and what compensation should be proposed to the government?” he said.

The Chairman, Ogun State Peace Committee on Herder-Farmer Conflicts, while adding that the Committee would also want to have a comprehensive report on those who lost their lives during the conflicts, said that the Administration of Prince Dapo Abiodun was not happy with happenings in the area and wants to get to the root of the problem.

The Chairman, Sub-Committee on Palliatives and also Commissioner for Budget and Planning, Olaolu Olabimtan who noted that the Committee was all out to find out the truth about the matter, said that the distribution of the palliatives to the community was a further attestation to the love the Governor has for his people.

The Onigua of Eggualand, Oba Adeleye Dosunmu, while receiving the palliatives on behalf of the people of his Kingdom in his palace, commended the State Governor for sharing in their pain during and after the conflict.

Oba Dosunmu also added that his people are peaceful people who can live with any tribe, as long as they abide by the laws of the land.

The Committee, after it received a comprehensive compilation of those that lost their lives during the attacks from the Onigua of Eggualand, later visited Asa where the Committee saw the level of destruction in the area.