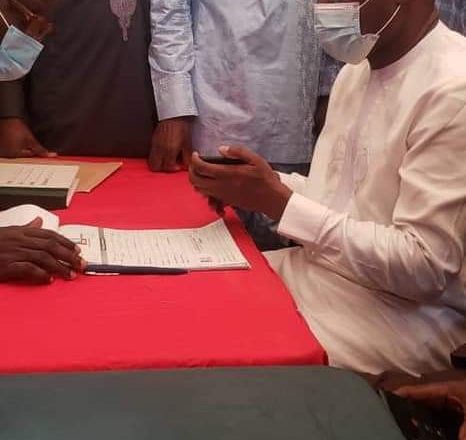 Former Speaker of the House of Representatives,Hon Dimeji Bankole on Wednesday officially registered as a member of the All Progressives Congress (APC) in Ogun State.

Bankole who recently defected to the APC, validated his membership at his ward 10, Iporo – Sodeke unit in Abeokuta South Local Government Area of the state.

The former Speaker who was governorship candidate of the Action Democratic Party (ADP) in 2019 election joined the ruling party at a meeting with National Caretaker Chairman of APC, Mai Mala Buni in Abuja.

Bankole also met with Governor Dapo Abiodun at Governor’s office Oke Mosan on Thursday, as part of moves to formalise his defection.

Led by the representatives of the national and state officials of APC, Bankole on Wednesday participated in the ongoing membership registration and validation exercise of the party at his ward in the state capital.

In his brief remarks, the former governorship candidate told his supporters and party officials that the registration marks his official defection to the ruling party.

Bankole, however, urged the party members to always pray for the success of the party.

“Today is not for a long speech. The only thing I will say is that I have now joined APC. What is left is to continue praying on the step we have taken. It will be well by God’s grace,” Bankole said.

The State Chairman of APC, Yemi Sanusi described Bankole’s defection to APC as home coming, saying his former party, was one of the legacy parties that formed the APC.

Sanusi asked him to fully integrate himself into the party and contribute meaningfully towards the success of APC ahead of 2023 elections.