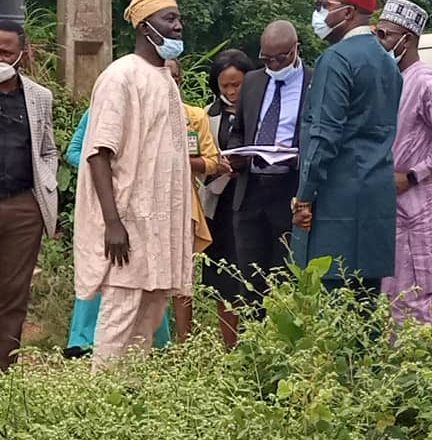 The Chairman of House of Representatives Committee on Health, Dr.Pascal Obi has said that his Committee was working will relevant government ministries and departments towards improved health workers’ welfare, most especially the issue of increasing their hazard allowance among other sundry issues.

The Chairman made the disclosure when he led members of his Committee on oversight functions to the Federal Medical Centre Idi-Aba Abeokuta.

Dr. Obi who regretted the incessant crisis in the health sector remarked that on the issue of hazard allowance, “we are handling it centrally in Abuja because it concerns every other health institutions in Nigeria especially the ones owned by federal government

” We are already talking with them at the national level. We have had more than enough of these strikes and it is not doing these institutions any good. It is just like an ailment that doesn’t do anybody any good”

The Chairman however sued for compromise on the part of the government and various unions in the health sector in the overall interest of the patients.

He said, “both the people on strike and the people that they are supposed to serve are suffering . So why don’t we at least apply some compromises, the government will compromise a bit, the striking workers will also compromise so that we can find a way around these problems and get them solved so that the system will not collapse”

Dr. Obi expressed satisfaction with the pragmatic leadership of the Medical Director, Prof Adewale Musa-Olomu, whom he described as ” doing his best to the Glory of God in the total transformation of this hospital”

“He has taken us round, we saw a lot of equipment and to my greatest surprise, I saw about 4 bunkers meant for installation of linear accelerator for cancer radio therapy”

The Chairman thanked President Muhammadu Buhari for “responding to the request and recommendations we made after last year’s oversight activities because we met most of these hospitals in a very sorry state but the approval of the President made it possible for us to have greater allocations especially capital votes to these institutions.”

Dr. Obi therefore called on the managers of “these funds in the various health institutions to be very prudent because if prudence is not applied, the end result will not be achieved and it will not be in the interest of the nation.”

Earlier in his welcome speech, the Medical Director, Prof Musa-Olomu applauded the Committee for its seriousness at revamping the health sector through funds appropriation

He assured that most of the projects to which funds had been appropriated will be completed in a couple of weeks.

The Medical Director pledged his commitment and determination to continue the pursuit of the overall development of the Centre .