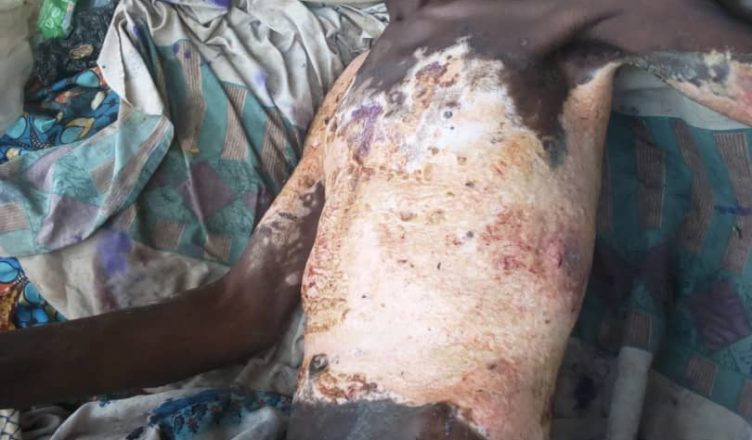 It is so unfortunate for a 24 year old man,Emmanuel Anjorin who specialised in snaching motorcycle as he fell inside a hot ground nut oil while trying to escape with a stolen bike.
Emmanuel Anjorin explained that he had successfully stolen the motorcycle and while trying to run away, he lost the control of the bike and fell inside a hot ground nut oil which was inside a big frying pan been used to fry puff puff in Ibadan.
Emmanuel explained that despite the injury, he jumped out of the basin and escaped from the mob.

He futher explained that when the pain was becoming unbearable, he managed to move to Dandaru-Agodi- premier hotel junction to beg for help so he can take care of himself.

Speaking in agony, Emmanuel explained that about six years ago,he ran away from home as his parents resided in Lagos .Since then,the city of Ibadan have given him comfort and support for his robbery and Motorcycle snaching.

Anjorin has his body peeled from neck to hip area and has to cover the open wound with rags and nylon.

Most passers-by never knew his ordeal as many sympathized with him by giving him money.He is a regular face in the area, among those who normally beg for arm.