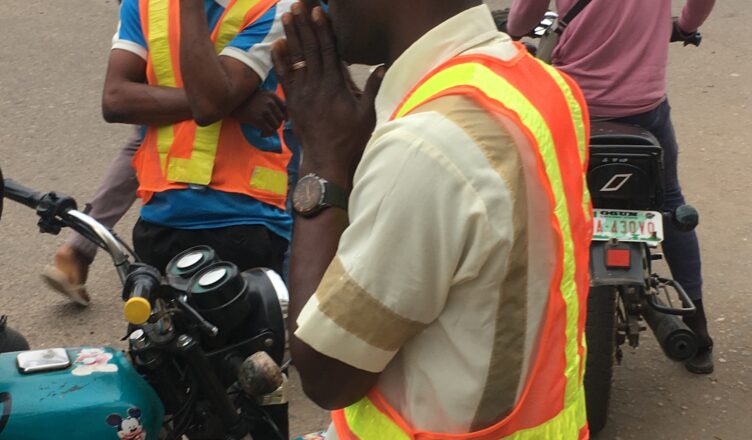 …TRACE calls on the public to beware of false claim

A traffic law enforcement team in Abeokuta the Ogun state capital have been accused of illegal seizure of motorists, fraudulent collection of revenue and impersonation of Traffic Compliance and Enforcement Corps(TRACE).

The team who could not provide any logical details of their operation, rules of engagement or details of management are mostly seen at Okelewo under bridge, Iyano Mortuary Under Bridge, Sapon Under Bridge wearing a cream color shirt on a black trousers.

Our reporter who visited their alleged office beside So Safe Command office, Old Ministry of Land, Okelewo, found out the enforcement agency didn’t have any administrative office but a kiosk where they hang around to negotiate payment for their victims.

A receipt issued carried the logo of TRACE indicating their partnership with the traffic enforcement agency.

On investigation, TRACE denied any collaboration calling on the public to beware of such false claims.

Dr. Barr. Tijani Fatai, Director Legal Service for TRACE made this known through his response to a letter of impersonation sent to the agency by Ogun state Committee for the Defense of Human Rights .

Dr Fatai announced that,”it is illegal to use the logo or any paraphernalia of TRACE on their revenue receipt issue for any traffic infraction. Hence, they should desist from using it forthwith.”

Suraju Akanbi, a commercial motorcycle operator who was once a victim said he was apprehended at Okelewo bridge, brought to their location at the back of Ministry of Lands and asked to pay #5000(Five thousand Naira). He said inability to raise the money made his motorcycle spent two days in their custody. He said they eventually collected #3000(Three Thousand Naira) and no receipt was issued.

Timothy Ajayi, a victim also, said most of them are political hoodlums that will not listen to anyone once you are apprehended. He said,” all they will do is to point at the woman under the tree for payment. The fat woman will issue receipt.”