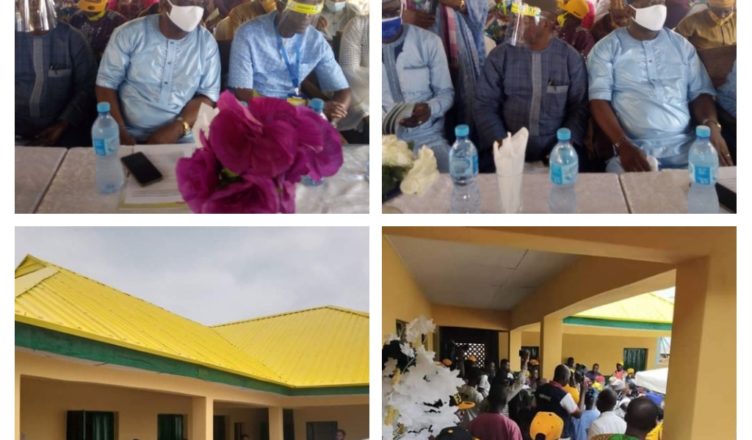 The transition Chairman of IFO Local Government,Hon Fola Salami and his team made record with Commissioning of laudable projects within the local government in a short time in office.
The projects were commissioned yesterday by the Governor Prince Dapo Abiodun Mfr,with funfair at the presence of community leaders, opinion leaders and party faithfuls.
The governor,represented by the Commissioner for Local Government and Chieftaincy Affairs,Hon Afolabi Afuape said he was so impressed with the efforts of the Hon Fola Salami led team.He said,”Wow! I never believed a Local government in Ogun State could build this kind of a school. It’s still like a dream that this kind of good project can be executed by our Local Councils because this happened last during the reign of H.E, Otunba Gbenga Daniel. However, During the last administration, I was SA in my Local Government and we could not build an ordinary toilet not to talk of a beautiful project like this.

Honestly, His Excellency, Prince Dapo Abiodun deserves kudos and commendations for releasing funds to our Local Councils for execution of projects. At least, we are seeing changes and a wide difference.”
In his remark,the transition Chairman,Hon Salami said the various projects were the needs of different communities which was the mandate of the government.He emphasized that,”the purpose of governance is to serve the people especially at the grassroots,and that is exactly what we are doing.This is just a tip of the iceberg,as we promised to do more.It is our mandate to bring government presence to the people especially on road projects.”
Hon Afuape assured the people of Ishashi Community of Ifo LG that the state government have awared the road project that led to their Community,and work would start soon.He also said that the present administration have great plans for the local communities, which will be in phases.He encouraged the people to be patient as the dividend of democracy will soon go round.
The projects commissioned are 3 block of classrooms at Z I Primary School, Ishashi area of Ajuwon/Akute wards, Primary Health Center at Ifo town,a borehole at Olowofela village at Sunre ward, borehole at Okenla,and rooms at Primary Health Center at Okearo/Ibaragun/Robinyan ward.