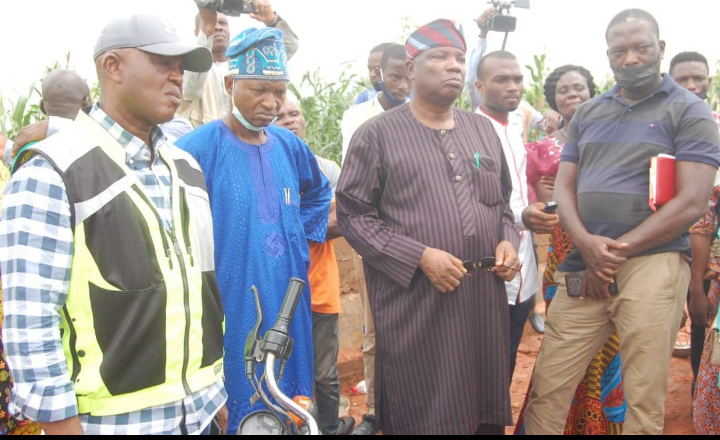 The governor of Ogun state Prince Dapo Abiodun have responded to the trending video on the social media of flood at Olorunsogo community,Lewu Obalende in Ijebu-ode by sending a delegation to see the damages.
The team led by Special Adviser to the governor on Infrastructure,Eng Babatunde Akeem Adesina,and Special Adviser on Environment,Ola Oresanya,with the transition Chairman of Ijebu-ode local government,Eng Olugbenga Olugbile visited the community, a new residential area in Lewu Obalende in Ijebu-ode.
A resident of the area said the flood was as a result of heavy flow of water from the upper part of the area to the valley which has little or no drainage channel.
While speaking with Journalists,Mr Oresanya said the topography of the area and lack of good drainage was the cause of the flood.He said,”most houses in this area were built with no approval or proper plan. Lack of drainage is why we have such heavy flow of rain water on the street.We will do our part as government to review the water channel of the upper part of the area,and the community must construct water channel in front of their houses to control the coming water.”
He also added that,”we will make sure that the road construction make plan for proper water channel from uphill to the valley, while the community must not empty their dirt in the drainage.”
The transition Chairman, Ijebu-ode local government,Eng Olugbenga Olugbile commended the state governor,Prince Dapo Abiodun for his quick response and concern for the safety and well being of the people.
He also advised the community not to build on water ways to avoid flooding.
He added that the community should sensitive their residents on environmental laws and how to have a safe and clean society.
The community appreciated the government and promised their support in the ongoing development in the state.
They prayed for the team and the success of Prince Dapo Abiodun administration.