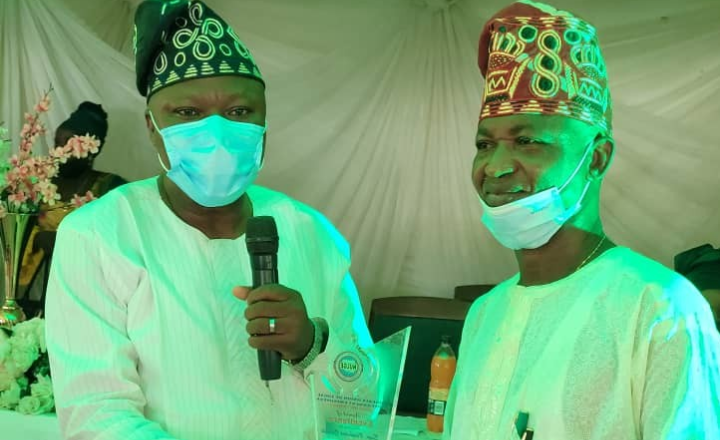 The Nigeria Union of Local Government Employees, Ijebu Ode Local Government Chapter has on Thursday, honoured the Chairman of Transition Committee of the Local Government, Engr. Olugbenga OLUGBILE, with an Award of Excellence, in recognition of his contributions to the development of the local government area.

The council boss was honoured alongside other awardees at the event held at the Millennium Hall of the local government Secretariat, Ijebu Ode, which also featured fund-raising for the completion of staff canteen, staff toilet, and refurbishment of NULGE Bus.

In his address at the occasion, the Chief Host, and Transition Chairman of the Local Government, Engr. Olugbenga OLUGBILE, thanked the union for her cooperation despite the limited resources at the council’s disposal. He appreciated the workers for their support to his administration, and said he is very proud to have produced the National President of NULGE, Comrade Akeem AMBALI, who is the Director of Community Development in the local government.

Engr. OLUGBILE commended the Governor of Ogun State, Prince Dapo ABIODUN, for his massive road intervention in the local government, particularly, the Ijebu Ode-Epe Expressway, and the ongoing Molipa Expressway, among other completed rehabilitated roads.

Speaking at the event, the Mother of the Day, who is also an awardee, Barr. Olubukunola ONABANJO, Chairman, Local Government Service Commission, Ogun State, lauded the NULGE for her ingenuity, taking cognisance of the fact that government cannot do it alone, urging all awardees and invitees, to donate generously towards the cause.

Earlier in his welcome address, Branch Chairman of the Union, Comrade Tosin KUKU, describes the event as an avenue to appreciate all sons and daughters of Ijebuland, who have contributed to the development of the local government. According to him, it is also a way of seeking the support of well-meaning individuals towards the actualisation of some projects embarked upon by the Union.

Speaking on behalf of the Awardees, Dr. Tayo LAWAL, Special Adviser on Health to the Governor of Ogun State, thanked the organiser, for the honour done to them, while pledging their continuous support to the projects, which they are proud to be associated with.